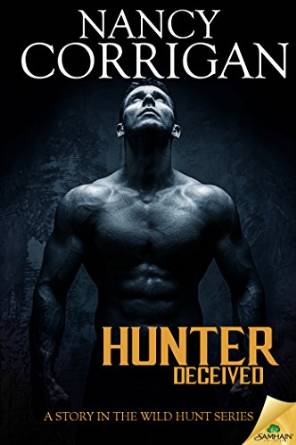 Note: Originally published as Hunter Betrayed by Ellora's Cave. It has been re-edited, expanded and re-titled as Hunter Deceived.

He was born to kill her...but he'll risk all to save her.

Every day, Harley fights the urge to embrace the dark heritage that could turn her Unseelie. Evil. "Bad." A nightmarish monster like the ones that wiped out her family. The only thing keeping her on this side of Seelie is a promise made to the ghostly man who saved her that terrible night.

Whenever she's tempted, she calls up a vision of his eyes. Hears his voice calling her back from the brink of madness. Years later, when she returns to the scene of her living hell, he's her only hope for salvation.

Calan, the leader of the Wild Hunt, was created to protect mankind from the Unseelie Court, not love one of them. He never expected the rightness he felt with her all those years ago would explode into desire.

But saving her from a fate she can't escape could damn them both...and leave the world open for destruction.

Warning: Contains a half-fae woman who could really use a Seelie version of AA to stay clean and monster-free. And a rider of the Wild Hunt who'll take any risk to keep her safe from her enemies. Including himself.

The night her world became a deadly nightmare, Harley saw the creatures of darkness and she ran while hearing a comforting and powerful voice calling her. That voice belonged to the most compelling eyes she had ever seen, yes, just eyes, the imaginings of a girl desperate for safety or a vision of a being from another world? Harley is part human and part Unseelie, the daughter of the Unseelie King. She has strived to do good, be good, but the years and the hiding are taking their toll as she feels the darkside pulling her in, knows she is being followed, hunted like prey.

Nine years later, she returns to where she saw the eyes, heard the voice and he is there, suffering an eternity of torture along with his comrades to keep the humans safe. Calan is the leader of the Wild Hunt, children of the Lord of the Underworld created to end the reign of the Unseelie court and protect humanity. His duty is clear, but his heart calls to Harley. Theirs is a doomed love, there is no good outcome, but a soul-deep love cannot be denied, no matter the threats of eternal pain. The passion that exists between them is searing hot, carnal and intense.

Nancy Corrigan’s Hunter Deceived is dark, filled with passion, the devotion of two souls meant to be together, but the odds are against them and danger is around every corner. Feel the emotions, be part of the action and realize that maybe this time, love will not conquer all, no matter what the angels say. Unless...

Wonderful characters, supporting characters and a plot that is part hot as Hades, part tender as Love and all completely magnetic.

I received a review copy from Nancy Corrigan in exchange for my honest review.