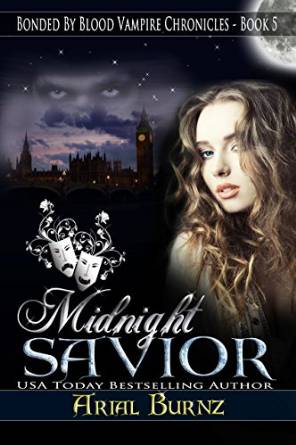 London, 1888 – Jack the RipperHaving loved and lost his soul mate three times, Broderick MacDougal refuses to put his beloved Blossom in danger once more by barging into her life. As a vampire with a dark past and countless enemies, he brings too many risks with him to selfishly claim her as his own. But keeping her at a distance, while he guarantees she lives a “normal” life, proves to be much more difficult than he anticipated–and so is encouraging her to find refuge in the arms of the another man. As much as Broderick hates to admit it, Theodore Coleman may be Belle’s only safe haven.

Christabelle Williams has fought for her financial independence since the cradle, and nothing–not living on the poverty-stricken streets of Whitechapel, not even the handsome and rich Theodore Coleman–will make her turn to anyone for help. But Belle is attacked and her injuries jeopardize her living as a laundress. Finally accepting Theo’s marriage proposal wouldn’t be so bad…if she wasn’t haunted by the sinful encounters with a passionate vampire in her dreams.

Jack the Ripper starts prowling the streets where Christabelle lives…and he is no mere mortal. Broderick must act quickly to get Belle out of harm’s way before the Whitechapel murderer learns what she means to Broderick and use her to extract payment for an old debt.

Reader Advisory: Though this story contains some love scenes, they are described using graphic and direct language. (In other words, they’re SUPER hot, but not frequent.)

What is the truth behind the Whitechapel serial killer, Jack the Ripper? The end of the nineteenth century is filled with the terrors of a sinister murderer how never was found. Could he be more than a twisted mortal? Who is he and what connection does he have to Broderick, the vampire with the dark and deadly past?

Imagine an eternity of loving your soulmate, centuries upon centuries of sharing, side by side. For Broderick MacDougal that is nothing but a dream, a nightmare actually, because every time he and his soulmate find each other again, she suffers, horribly and this time he will deny himself to keep her safe. In her current re-incarnation, Davina is the woman Christabelle, a woman struggling to be independent and self –sufficient until the attack. It is then that a wealthy young man declares his love for her and offers his name and protection. Can Broderick stand by and watch his Davina live and love another man or will their souls call to one another again through the veil of time and their hearts?

There is more going on than an eternity of broken dreams, as another ancient vampire struggles with his own demons and the weight of ancient prophecies hang over them all.

Leave it to the amazing talent of author Arial Burnz to take passion to the next level with her words as she gives life to her characters, their existence and the dangerous world they live in. No, you will not find page after page of her signature sizzling scenes, but you will find a depth of detail that is far more fulfilling and tantalizing because of their infrequency. Feel the passion, the love and the heat as two soulmates once again tempt the hands of Fate for a love that will never die. Understand the power of a vampire’s love and their will to protect that love at any cost.

I received an ARC edition from Arial Burnz in exchange for my honest review.