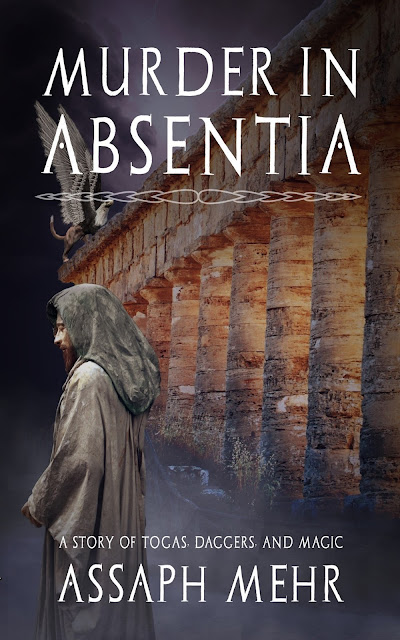 A young man is found dead in his bed, with a look of extreme agony on his face and strange tattoos all over his body. His distraught senator father suspects foul play, and knows who to call on.

Enter Felix, a professional investigator. In the business of ferreting out dark information for his clients, Felix is neither a traditional detective nor a traditional magician – but something in between. Drawing on his experience of dealing with the shady elements of society and his aborted education in the magical arts, Felix dons his toga and sets out to discover the young man’s killers.

Murder in absentia is set in a fantasy world. The city of Egretia borrows elements from a thousand years of ancient Roman culture, from the founding of Rome to the late empire, mixed with a judicious amount of magic. This is a story of a cynical, hardboiled detective dealing with anything from daily life to the old forces roaming the world

This is a story of Togas, Daggers and Magic - it will appeal to lovers of urban fantasy, detective murder mysteries and ancient Rome.

Magnum P.I. in a toga? Long before Sherlock Holmes, Paul Drake or even Lassie, there was Felix, a magic wielding Private Investigator in a make believe Rome. Assaph Mehr has written the perfect murder mystery with a touch of who-dun-it, a little humor, danger and a LOT of food. No wonder they wore togas.

No, I’m not pointing fun at the author’s tale, I am marveling at how engaging it was. A son of a wealthy and powerful politician has been brutally murdered in a most painful way and his body is covered in ritualistic tattoos. Is this a magical killing of dark intent? Felix is on the case, a case that will lead him on a round-about journey through the darker sides of life, magic and power. At the end of that maze, will he find justice for the dead? Will a murderer be brought to justice?

Follow Felix as he dons his perfect facades to suit each occasion, from charming to seemingly simple, all while calculating the odds on what may have happened and uncovering dark magics and their practitioners. As he collects each clue, the plot thickens, but as the pieces all fall into place, no one could have guessed who dun it and why.

Felix is the slightly quirky, always entertaining ancient version of today’s P.I.s. Without a computer in sight, his limited magic isn’t even as sharp as his brain or as far reaching as his connections. Assaph Mehr has taken us to a fantasy Roman world with some crusty characters that will make you smile, stodgy characters that you will roll your eyes at and of course, those characters you love to hate. Through it all, you will have to love Felix, because nothing keeps him down.

A wonderfully told tale of murder, mystery and mayhem with a bit of magic thrown in.

I received this copy from the author, Assaph Mehr in exchange for my honest review.