The Final KO by Jessica Florence 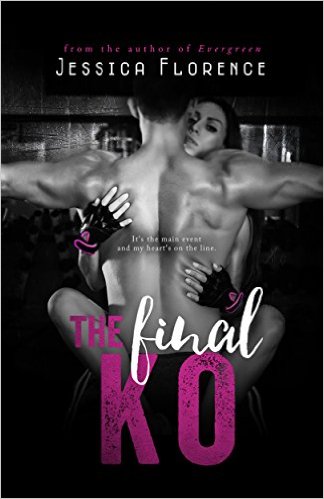 The Final KO
by Jessica Florence

I fight bitches for a living.

Which makes finding a decent guy hard when you're a female MMA fighter. None of them have been my equal. I yearn for a man who can push me to reach new heights and challenge me. A man who will treat me like a lady then lift me up by my ass and impale me against the wall.

But when Arson Kade, MMA's top fighter and notorious manwhore declares he's that man for me I have my doubts. Any sane woman would.

There seems to be more to Arson than the rumors that surround him, but will it make me fall hard or run for the hills?
I know I've got no choice but to hold on for the ride

It's the main event and my heart's on the line
But will it be the Final KO?

The Final KO by Jessica Florence

Two top mixed martial arts fighters duke it out between their hearts, an ugly past and fear of an unknown future. Arson Kade is a world champion, an infamous manwhore and eh suddenly shows up in Florida to declare to MMA female fighter, Rayne, that he is her future. Bold? Insane? Cavemanish? Yes to all, but Arson was also, drop dead gorgeous, charming and swears his fealty to Rayne, as well as his heart and soul. Rayne is taken aback, but must admit, this man is sex on a stick and going a few “rounds” between the sheets with him wouldn’t be so bad. Little did she know her world would be turned upside down by this self-confident man. Is Arson’s confidence a façade for the man he is behind the mask? How does he know Rayne is the warrior woman for him?

The Final KO by Jessica Florence is as hot as the Vegas sand and as steamy as the Florida humidity. Rayne is determined to make a comeback after a brutal fight that took her down. She is floored that Arson could really love her. Arson is at the end of his career, determined to go out with a win and plans on taking Rayne as his prize. Together they are like Mt. Vesuvius and Mt. St. Helen their romance is so lava hot. A quick read with some MMA tidbits and a lot of emotional upheaval, a great break from reality when more sizzle than depth is on the menu.