The Pirate Articles by Lavinia Kiss 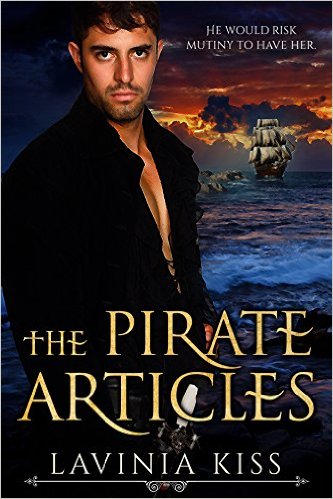 The Pirate Articles
by Lavinia Kiss

Corinna was destined for a life of gentility. With her connections, family, and beauty, marriage to a rich plantation owner was within her grasp. She never expected to be taken by pirates, much less to join them.

Few expect Captain Aster. Brash, handsome, and quick with a sword, he's a man used to taking what he wants. He wants feisty Corinna to fill his bed. Unfortunately, so do the rest of his company, and it will be a long time before they reach a friendly port.

If Corinna is to survive she'll have to abandon her ladylike ambitions and fight like a true pirate - for her heart.

The Pirate Articles by Lavinia Kiss

Back in the day of sailing ships that took forever to get from port to port, the constant fear on the seas were pirates. Corinna on her way to a new life of gentility and wealth, everything she had been raised for and then it happened. Pirates, the scourge of the sea took the ship she was on, killed the crew and anyone who got in their way, and took few prisoners. Being the only woman, Corinne became every pirate’s dream, far from the world she was used to, she stood her ground to the humiliation and won the eye of the captain.

Far from the typical pirate Captain, Aster was tall, handsome and definitely an alpha brute. So how could Corrine both hate and lust for this barbaric baboon? How can she gain his confidence and find a way to sneak of the ship at the next port they plundered? When all else fails, a lady never cowers in fear, they attempt to use whatever is at their disposable to gain their way, but who knew her body would jump ship and crave the arms and charms of the handsome man? Who knew there was more to him than a thief of the high seas? And who knew he, too would see something in this feisty lady, a backbone stronger than the largest mast, the worst gale and a heart bigger than Davey Jones’ Locker?

I’m sure the waters heated to tropical temps as these two took advantage of the rolling ship, rocking waves and the lock on the Captain’s door! Lavinia Kiss has a steamy adventure on the high seas that will have even the most rooted land lovers ready to set sail. If you like historical romance where the hero is all brawn, bold and daring, a true swashbuckler and a heroine that is his match and then some, The Pirate Articles is a great way to get that pirate fantasy fix, with a big dollop of spice and fun.
Posted by Dii at 7:57 PM