His Ruthless Bite by Brooklyn Ann 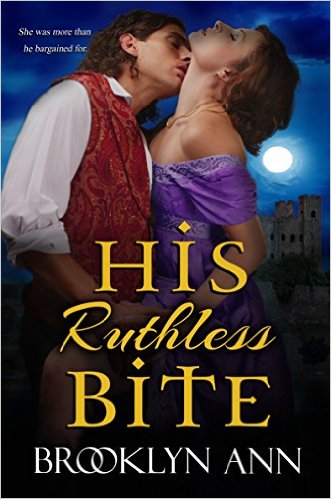 His Ruthless Bite
by Brooklyn Ann

The Lord Vampire of Rochester doesn’t do a favor without a price. And now it’s time to collect.

Gavin Drake, Baron of Darkwood is being pestered by nosy neighbors and matchmaking mothers of the mortal nobility. To escape their scrutiny, he concludes that it’s time to take a wife. After witnessing the young vampire Lenore’s loyalty to the Lord of London, he decides she is sufficient for the role.

After surviving kidnapping and abuse from rogue vampires, Lenore Graves wants to help other women recover from their inner wounds. She befriends physician John Elliotson and uses her vampire powers to aid him in using mesmerism on his patients. When the Lord Vampire of London declares that Lenore is the price the Lord Vampire of Rochester demands for aiding him in battle the previous year, she is terrified. Will all of her healing and hard work be destroyed by Ruthless Rochester? And yet, she can’t suppress stirrings of desire at the memory of their potent encounter.

After Gavin assures her that the marriage will be in name only, Lenore reluctantly accepts Gavin’s proposal rather than face potential animosity from her new lord. Determined to continue her work, she invites John Elliotson to Rochester. As they help women recover from traumas, Lenore explores her own inner turmoil and examines her attraction to her husband.

Gavin quickly realizes his marriage is a mistake. His new baroness’s involvement with the mesmerist is damaging his reputation among mortals and vampires alike. He knows he should put a stop to Lenore’s antics— yet her tender heart is warming his own and tempting him to make her his bride in truth.

As Lenore and Gavin’s relationship blossoms, the leader of a gang of rogue vampires embarks on a quest for vengeance against Gavin… using Lenore as his key.

His Ruthless Bite by  Brooklyn Ann

Brooklyn Ann isn’t holding anything back in His Ruthless Bite, pairing a traumatized victim of gang rape with a powerful vampire of nobility who needs a “sufficient” wife to ward off the advances of mortal mothers scheming for his marriage to their daughters. Sounds rather brutal in itself, doesn’t it?
But, as they say, there is more and Brooklyn Ann delivers. Lenore is terrified of the powerful Gavin, her only experience with sex was a living hell and she wants no part of the pain or demoralizing act, but as she sees the true side of this man, she finds that he can be warm, protective and caring.

Rogue vampires are on the loose and one of them just may be out to seek revenge on Gavin, using any means possible, not enough? A vampire hunter is “staking” his claim, also. As the “stronger-than-she-realizes Lenore uses her vampiric powers to aid other female victims, she becomes a target of said revenge. A woman ahead of her time, with a damaged heart of gold and conflicting feelings about her husband and their lack of intimate relations, Lenore is the star of this tale, in spite of her fears and nightmares.

The passion between these two comes alive in a beautiful way and Brooklyn Ann’s delivery through her vivid background scenes and sensual handling of romantic scenes is well-done.

I received an ARC edition in exchange for my honest review.