Into the Flames by Roy M. Griffis (By the Hands of Men Book 2) 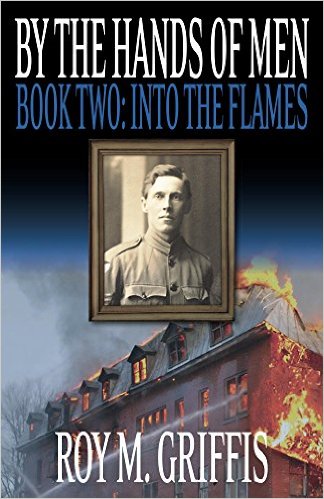 Into the Flames
by Roy M. Griffis

Charlotte Braninov, traumatized by loss and her service as a frontline nurse, returns to war-torn Russia to find her family. Captured by the Red Army, she exchanges one hell for another. Her still-loyal Lieutenant, Robert Fitzgerald, believing the woman he loves is dead, struggles to recover from the ravages of combat and typhus. In a desperate bid to rediscover himself, he commits to serve his country as a pawn in distant Shanghai. Forging their destinies in a world reeling after The Great War, Charlotte and Robert will learn anew the horror and the beauty the hands of men can create when they descend into the flames.

Into the Flames by Roy M. Griffis
(By the Hands of Men Book 2)

The saga of pain, loss and love continues as Roy Griffis takes us back to post World War I and we pick up the story of the lovely Russian, Charlotte and the English soldier she fell in love with, Robert Fitzgerald. Into the Flames tells of two souls, brutally separated and not knowing what happened to the other, yet each had a path to follow that took them into equally dangerous worlds, as they continued to look into every face to find each other.

Charlotte returns to her homeland, only to find that this is not the Russia she remembers, and is a worse nightmare for her than the battlefronts she has left behind. Robert was sent home to recover from the brutality of war, his injuries and typhus, leaving him a shell of the man he once was, never knowing, but assuming Charlotte has been killed.

Their paths are destined by fate, one to become an agent for his crown and country in a foreign land, one to become a prisoner of war in the war raging within her homeland. Both risk life and limb, both risk their sanity as life continues to be a living Hell, both internally and externally.

Roy Griffis brings history to life, making the horrors of war and espionage breathe as two souls attempt to live on with their hearts shredded with pain. This slice of history, split between both Charlotte’s and Robert’s lives as they attempt to save others to fill the emptiness they feel. Mr. Griffis writes with heart, as he allows his readers to feel each moment as if they were right there. Wonderful characters, some a little mysterious, but all are very well developed and uniquely placed in this saga exactly when needed. Highly recommended reading for history lovers, highly recommended for anyone who likes good reading with depth.

I received this review copy from the author in exchange for my honest review.