The Art of Not Breathing by Sarah Alexander 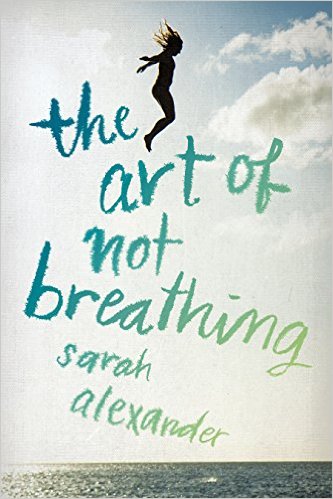 The Art of Not Breathing
by Sarah Alexander

Since her twin brother, Eddie, drowned five years ago, sixteen-year-old Elsie Main has tried to remember what really happened that fateful day on the beach. One minute Eddie was there, and the next he was gone. Seventeen-year-old Tay McKenzie is a cute and mysterious boy that Elsie meets in her favorite boathouse hangout. When Tay introduces Elsie to the world of freediving, she vows to find the answers she seeks at the bottom of the sea.

The Art of Not Breathing by Sarah Alexander

Her twin brother drowned under her watch and for five agonizing years Elsie has carried the burden of guilt. Eddie had special needs and could be a handful, but she let go of his hand and he ran into the sea to follow their older brother and he never returned. From that day forward her family imploded, any surface crack that may have had become gaping fissures, with everyone holding their secrets inside. For Elsie, she could see and hear her twin in her nightmares, as if he was calling to her to find him far below the water. She took up free diving with the help of a new boy in town, an outcast of sorts who carries his own painful secrets. Tay made Elsie feel again, truly feel, but he, too disappeared before she could seek an end to her nightmares.

They say twins have a special bond, one that transcends understanding, and Elsie will not stop until she knows the truth of that day and remembers the events she has blanked out. What she discovers is that for all of the guilt she carried, hers was the least of it all, the world is full of selfish actions and many of these actions contributed to the events that day.

The Art of Not Breathing by Sarah Alexander is a heartbreaking tale of loss, guilt and hope for redemption. It is a tale of a dysfunctional family who was already broken, but further degraded as each member became so self-absorbed in their won loss that they forgot they were a unit that was supposed to share, comfort and help heal the festering wound. They forgot that only one of them had died, not all of them. Ms. Alexander’s writing is grueling at times, heart-wrenching and shrouded in the veil of pain that surrounds Elsie and those around her. Well written, this is NOT a tale for those looking for light reading.

I received this copy through NetGalley from HMH Books for Young Readers in exchange for my honest review.