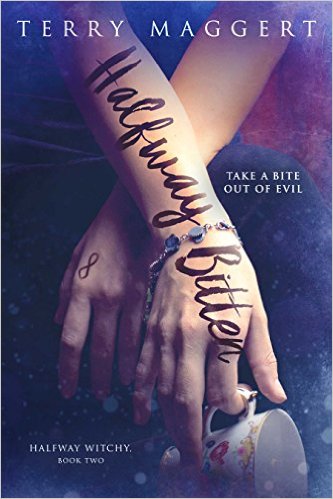 The circus came to Halfway, and they brought the weird.

When clowns, vampires, and corpses start piling up in town, Carlie has to break away from her boyfriend, Wulfric, to bring her witchy skills to the table- or grill, as the case may be.
When the body of a young woman washes up in the lake, it unleashes a spiral of mystery that will bring Carlie, Gran, and Wulfric into a storm of magical warfare. Spells will fly. Curses will rain. Amidst it all, Carlie will make waffles, protect her town, and find out if a man from the distant past can join her in happy ever after.
With love and honor at stake, Carlie has no peer

Waffles, witchcraft, and a tsunami of magical warfare, and Carlie is stuck in the middle when hell is unleashed in Halfway. Terry Maggert’s Halfway Bitten is filled with magic, mystery and mayhem, so hang on tight as Carlie rushes in to save the day, and quite possibly her heart.

After skillfully setting the stage in book one, Terry Maggert plunges us directly into the fray when a body washes up on the shore and brings mystery in its wake. Vampires, werepanthers, ghosts and clowns? Hey the circus has come to town and unlike the Greatest Show on Earth, it is the Deadliest Show in Halfway.

Our Carlie is still full of snark, attitude and makes for one rocking heroine as she and Gran face off against evil. What of Wulfric? What has happened to him? Has he gone feral? Is he lost to Carlie forever? Never underestimate the power of a witch in love and certainly never underestimate Carlie when her town, her people are threatened.

Certainly fast-paced, wickedly twisted and full of surprises, Terry Maggert has created a heroine who is well-rounded, grounded and, come on, she makes great waffles. A fun read that flows along quickly to an ending that is priceless.

I received this copy from Terry Maggert in exchange for my honest review.