The Rules Series by Hanleigh Bradley With Special Author Interview 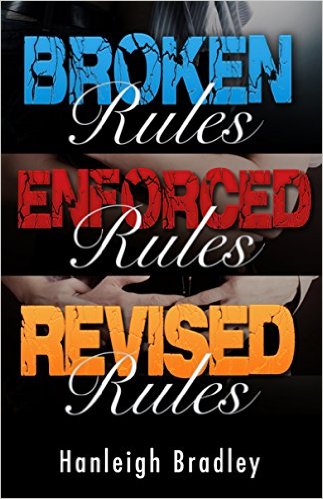 The Rules Series
by Hanleigh Bradley

Broken Rules
Aurora Stone knows what it means to keep the rules. She's lived with the expectations of the people around her. The only person who's expectations aren't met? Hers. On the spur of the moment, Aurora decides to break the rules. Only the list seems endless and Aurora is a little overwhelmed by it. When she sees Landon sat at the bar watching her, she makes a split second decision that might just change her life, one broken rule at a time. The list of broken rules quickly exceeds the number of rules they keep as they embark on this whirl wind adventure of control and chaos.

Enforced Rules:
​When Landon Peters met Aurora Stone everything changed. His world began unravelling and his sense of control seemed lost. Aurora's ability to make his rules seem completely irrelevant terrifies him, especially when he rashly invites her to his parents' house for dinner and he accidentally allows her to see more than he would like. With control out of his reach though he might just push to enforce the rules between himself and Aurora in a desperate attempt to reclaim the control he craves. After all, he told Aurora he would help her break her rules but he hadn't planned on it being at the expense of his own.

Revised Rules:
Now that Landon and Aurora are together they try to put their rules behind them but it might be easier said than done. Living together so early on in their relationship seemed like a great idea when Aurora first moved in, but a few weeks in they are beginning to realise that they both have flaws. Especially when life gets even more complicated and neither one of them feels in control of what's happening around them. Together, they learn that control is often fleeting but those moments of control can be hot and extremely intense, especially when the person you love is giving you that control, and losing control can be even more exhilarating when you lose it together.

The Rules Series by Hanleigh Bradley

Rules are good, we all have some we live by, but rules can be broken or bent and sometimes, tossing out the rules is the best thing one can do!

Aurora lived by ridged rules, and most of them either came from her over-protective parents or were her own self-devised torture to avoid confrontation, as well as to protect her heart. In a wild and crazy moment, after a few too many rule breaking tequilas, Aurora broke an iron-clad rule and it opened a new and beautiful world for her, one filled with love, lust and the awakening of her true self.

It was all his hot and sexy damn fault. Landon is a man of rules, means and power, who learned long ago to go after what he wants, love it, leave it and be done with it. Until he saw Aurora and he knew one night could never be enough and his own rules began to crumble, along with his hard won control.

How could two people awaken hidden desires and help each other break as many rules as possible and not find some turmoil along the way? Love, lust and romance isn’t all fun and games as these two break the cardinal rule and let their families know what they mean to each other? If you ask me, it’s high time they became the complete adults they were meant to be, not the half-formed prisoners of their parents’ dreams and manipulations. There are times when one needs to make a rule and to take control, for Aurora and Landon, these could become the moments that define their relationship.
The Rules Series by Hanleigh Bradley is an erotic journey for two souls who find that rules ARE meant to be broken, but only for the best of reasons, one of them being love. Watching Aurora finally embrace the charming woman she is, filled with passion and an adventurous side is fabulous. Seeing Landon go from wealthy playboy with a big do not enter sign on his heart to a card carrying romantic is breathtaking. Hearing his inner monologue as he come to the realization is priceless!

With a touch of humor, scorching heat and often reckless abandon, one may need asbestos gloves and an open mind to follow how quickly these two are dancing in the sheets. Trust me, Hanleigh Bradley hasn’t forgotten a heart-warming plot filled with tension and interfering parents, but, hats off to how Landon was allowed to handle it! The sex is far from vanilla and the romance is definitely chocolate covered strawberries as these two find that someone special through thick and thin.

I received this copy from Hanleigh Bradley in exchange for my honest review.

What inspired you to write The Rules Series?
A ton of things. My own family for one. The Stone family remind me of my family quite a bit. I grew up with my own list of rules but I was a tad more rebellious than Aurora. Rules are important. We make them for good reason but if we’re not careful we can let them ruin everything. They can hold us back from all the amazing things this world has to offer including love. Other people’s expectations can be the worst for that but Rules is all about realising that you have a choice – you can let those expectations keep you back or you can take on the rules that mean something to you whilst doing whatever you want with the rest. Rules is also about realising that some people are worth throwing the rule book away.

Who is your favourite character from The Rules Series?
I’m not sure I can pick just one. I love Tallulah and I can’t wait to write her story. She’s hurt and a little bit broken right now but she’s so bubbly and happy that you can’t help but love her. Aileen’s one of my favourites too, Aurora’s sister. We learn a lot about Aileen in this serial novel. She’s rebellious and independent. As for the guys, I actually really love Mr Stone, especially when we see him with his daughters Aurora and Aileen.

Why do rules matter so much to Aurora and Landon?
Aurora and Landon have completely different reasons for their rules. Aurora has grown up with her list of rules. For her it’s all about her family’s expectations and making them proud. She lets their expectations hold her back until she meets Landon and she realises that she’s been so busy meeting everyone elses’ expectations that’s she’s completely missed her own. As for Landon, his rules are a bit different. He likes distance and control. He doesn’t get attached or fall in love. I’ll let you learn his reasons for yourself.

What motivated you to become an author?
Writing isn't about money... it isn't about getting rich... or famous... it's about sharing the words in your heart. Those words are important... they mean something. In fact you could say they mean everything. Every story I write comes from a thought, a memory, an idea, an experience that for some reason I feel is worth sharing.

What inspires you to get out of bed each day?
Flip. I have no idea. I usually just get out of bed and don't really think about it. The thing I look forward to most each day is definitely writing though. It's rare that it's the first thing I get to do that day but it's usually the favourite part of my day.

When you're not writing, how do you spend your time?
I love reading. I usually read romance. I have a bit of a habit of getting so lost in the books I read that I forget to eat, sleep, live... for whole days at a time I can get lost in books until someone drags me out of my reading space.

How do you discover the ebooks you read?
Discovering books can be an absolute joy. A lot of the books I read are from authors that I have grown attached to, but I'm also a follower of a lot of authors on twitter so I get to hear about new books from indie authors quite easily.

Do you remember the first story you ever wrote?
In an English class at school I wrote a short story about Jack The Ripper... I write Romance now but I started with a prostitute, a knife and a murder...

What is your writing process?
I'm not sure I'd call it a process. I tend to write a chapter or two, read something else for a while, re-read and edit those chapters and then continue with the next few chapters before taking another break. It's a bit random but I always edit before continuing with the next fresh bit of my book, so that I know my starting place.

Do you remember the first story you ever read, and the impact it had on you?
Dr Seuss was my favourite childhood author; I pretty much lived on his books. Then as I grew up a bit, it was Meg Cabot and JK Rowling. Then Jane Austen. I think we like books but you can fall in love with an author's style of writing.

Describe your desk
I don't actually have a desk... I sit with my laptop on my lap in front of the TV, in bed, on the train, in the garden... my dogs are my writing companions too. They often try to lie across my laptop or underneath it.

Where did you grow up, and how did this influence your writing?
I was born in Scotland but live in England. I'm not sure if it influences my writing; except that I refuse to use any americanisms. I spell mum as mum not mom and I use an S when Americans use a Z. I put British phrases in my books like, "jolly good" and I love it when my characters call people "pillocks."

When did you first start writing?
I've only been writing romance for the last year. Before that I'd engaged in a bit of Fanfiction writing as a teenager but nothing more exciting than that.

What else have you got planned?
I have at least twenty books thought out... possibly more. I have so many stories I want to tell. They are all connected. I love it when authors create their own world with their words so that’s my aim. I want to create a world that my readers can get lost in. I’m currently working on The History Series. It’s about a couple of Landon’s employees. The books I’ll be working on after that will be about Tallulah and then after that I’ll tell Aileen’s story.

What's the story behind your latest book?
My latest serial novel; The History Series is about a girl called Clara. She's just come home to London after breaking up with her cheating boyfriend. Her first day at her new job she runs into her old high school nemesis, Andrew. Even after eight years, he still loves teasing her but Clara desperately needs to keep things professional between them. Andrew Contius has no intentions of being professional though. The first book in the series, Repeating History is available in the Amazon store and on Nook. The second part, Deleting History, will be released very soon.
Posted by Dii at 3:20 PM