A KNIGHT WITH GRACE by Laurel ODonnell Release Blitz & Giveaway 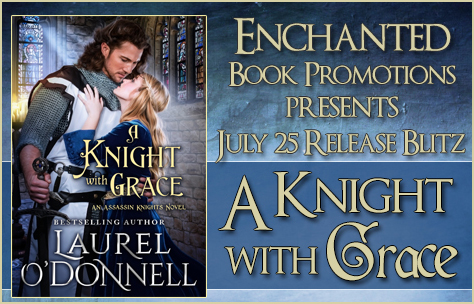 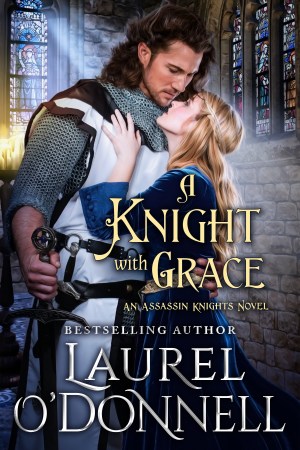 Title: A Knight with Grace
Author: Laurel O’Donnell
Genre: Historical Romance
Lady Grace Willoughby defies her father’s orders to marry Sir William de Tracy and escapes with a friend. She has no intention of wedding a cursed man, a man ostracized from the church, a man who would only doom any future children they might have to the fires of Hell. She prays for a knight to rescue her.
Excommunicated and outcast for a horrible crime in his past, Sir William de Tracy searches for forgiveness. Marriage has never crossed his mind until Lord Willoughby commissions him to retrieve his fleeing daughter and honor the dying wish of his father by marrying Grace.
But things are not as they seem. And when an assassin tries to kill Grace, William must choose between his soul and the woman he has come to love. Can William and Grace overcome their past and find the redemption and love both are so desperately seeking? 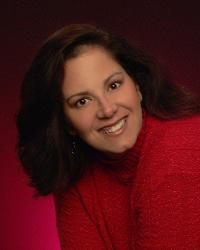 Bestselling, critically acclaimed novelist Laurel O’Donnell sold her first book, The Angel and the Prince, to Kensington after being a Romance Writers of America’s Golden Heart finalist. She has gone on to win many more awards, including the Holt Medallion Award for A Knight of Honor and the International Digital Award for Angel’s Assassin.
Born in Chicago, Illinois, Laurel began writing in junior high school when she carried a pen and paper around wherever she went. In college, she took fiction writing classes to further her skill. Her love of the medieval time period led her to work at King Richard’s Faire in Wisconsin where she learned stage combat and sword fighting. The Faire fed her insatiable appetite for the medieval era.
Laurel has many books yet to write and hopes you will join her on her journey to bring the medieval era to life! Please visit her at her website www.laurel-odonnell.com for the latest information about upcoming releases, contests and to contact her.