Tail and Trouble by Victor Catano 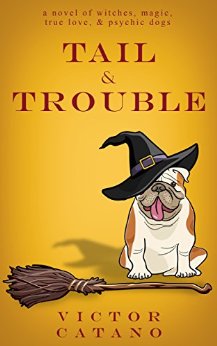 When Gabriel’s witch girlfriend doesn’t return from her latest trip, he gets on the road and heads out to find her. Sheila's coven is secretive and distrustful of Gabriel, so the only help he has is Sheila's familiar, a bulldog named Orson, who is psychically linked to both of them.

In Florida, they walk right into an elaborate plan to steal Orson. A mysterious wizard named Yareth is behind the plot, and he may also know where Sheila is.

Gabriel and Orson will have to fight for their lives as they navigate around all the magical roadblocks to force Yareth’s hand. They won’t give up until Sheila is safe.

Tail and Trouble by Victor Catano

In a witchy version of Where’s Waldo?, Author Victor Catano gave me fun, fantasy, fear and Florida without the price tag of a ticket to Disneyworld! Every novel is a surprise waiting to unfurl and Tail and Trouble truly is like a box of Cracker Jacks, filled with an awesome prize, the kind of quirky and tense reading that the title absolutely nails!!

Gabriel is in love with a witch and if you love a witch, you deal with her familiar, right? Orson has powers, a pudgy little bulldog body, and never met greasy food he didn’t want to devour. Add his attitude, snark and fierce loyalty to Sheila and well, between Gabriel’s hard-boiled army background and Orson’s psychic nose for Sheila, when she goes missing, the hunt is on.

Dark magic is in the air as the dynamic dup travels from NYC to Jacksonville, FL on a mission to save their witch. Is there more to Sheila’s disappearance than meets the eye? Is this a trap to lure our heroes in? Why can’t Orson feel his witch through their bond?

Victor Catano had me from page one and his style of writing is fun, filled with dialogue that is priceless and face it, who doesn’t love a slobbering, gaseous dog who has a perfect grasp of comedic timing while still being heroic? With Gabriel has his straightman, and Sheila as the unknown damsel in distress, not to mention mysterious evil at every turn, Mr. Catano has a gem here just waiting to be discovered! He has made me a believer that magic can be found between the pages of creative writing! Great beach or pool reading, too!

I received this copy from Victor Catano in exchange for my honest review.