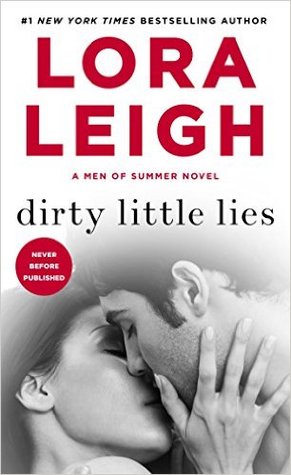 THE HEART HAS ITS SECRETS. Zack Richards knows he’s asking for trouble. Trying to protect a member of the notorious Maddox family could get a man killed—even a battle-scarred, muscle-ripped alpha like Zack. But the woman who has captured his wildest fantasies is nothing like the rest of her power-hungry clan. She’s innocent, beautiful, and has quickly become the one shining light in his dark, desperate world. The only woman worth fighting for…and dying for…

BUT PASSION NEVER LIES. Her name is Grace Maddox—and everybody knows that she is a marked woman. Targeted for her family’s sins and hunted like a wild animal, Grace has no choice but to accept Zack’s protection. In his arms, she finally feels safe. In his eyes, she sees an insatiable desire that mirrors her own. But the truth is dangerous—and could end up tearing them apart. Will surrendering to Zack end up being the biggest mistake of Grace’s life?

Dirty Little Lies is a seductive story that brings the fight against terrorism home.

The Kin were set up as the last home defense against terrorism but something has gone terribly wrong. Greed and betrayal have been uncovered, and it hit hard, with family members turning against each other for power and money.

Grace Maddox has found herself caught up in the cross fire and Zach Richards is her only hope.

Grace’s mother has been playing the kin against themselves for years, now caught in her treasonous acts, she has tried to deflect the blame on her own daughter, Grace. The kin aren’t taking any chances. They have decided to pull Grace in for interrogations that would have a war harden agent shaking in their boots…but Zach is having none of that. The only way Zach can save Grace is to claim her for his own and all that implies.

Grace has been in love with Zach since she was old enough to remember, how will survive living in his home and sharing his bed.

Zach has been enthralled by the sweet Grace but has always kept his distance knowing his secrets could tear Grace apart.

I really enjoyed Dirty Little Lies. My only complaint and in an effort to avoid spoilers, let’s just say, I had a hard time with how quickly Grace caved all around.

I received this ARC copy of Dirty Little Lies from St. Martin's Press in exchange for a honest review. This book is set for publication August 30, 2016.