Friends of the Wigwam by John William Huelskamp 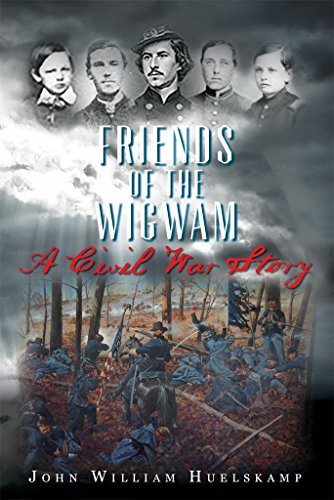 Friends of the Wigwam: A Civil War Story
by John William Huelskamp

FRIENDS OF THE WIGWAM is a historical novel and love story about six young friends whose innocence is stripped from them seemingly overnight in the brutal setting of the American Civil War.

Meticulously researched and based on real-life people and true events, FRIENDS OF THE WIGWAM spans 1857-1865 and introduces you to the courageous men and women from Illinois who staged one of the first contested national conventions, were responsible for getting Abraham Lincoln elected and made the ultimate sacrifice during the American Civil War.

From the true story of a young woman who successfully masqueraded as a man during the Civil War and was buried with full military honors to the often heart-wrenching letters home to wives and families and actual military correspondence between military leaders, author John William Huelskamp brings to life a volatile nation at war.

Celebrate each friend's successes and struggles on the battlefields, learn the story of those who led the battles, and meet a magnificent war-horse that is a steadfast survivor in the face of many tragedies.

Friends of the Wigwam by John William Huelskamp

If educators would use more books like Friends of the Wigwam as a tool to bring the past to life, I think more students would embrace the love of history and not take brief naps while going through those dry textbooks. History is about events, yes, but those events affected human beings, whether as victims or the cause.

The Civil War robbed this country of its innocence, it made enemies of brothers and divided a young country with the blade of hate. John William Huelskamp brings the human element to life by using a fictionalized version of real people, real events and real tragedies.

With well-researched facts and by keeping to the atmosphere of the mid nineteenth century when Lincoln made his run for the presidency, the Civil War broke out and neighbors that once worked together as one for the good of all, shredded the sense of unity.

Follow six young children, allies and friends in their own adventure find their world turn into a living Hell on Earth without truly understanding why. Heroes will rise and fall, blood is shed and the innocence of youth is shattered.

Enjoy the laughter of friends, feel the animosity of political enemies, and cry at the positions young men are thrown into on the battlefield. This is history, this makes war feel real, not numbers on a page or dates and places on a map. John William Huelskamp has given young and older readers a window into a time that helped shape the world of today and he did it with respect to those who lived it as he told the human side of the story.

I received this copy from John William Huelskamp in exchange for my honest review.