The Summer That Melted Everything by Tiffany McDaniel is Here! Author Interview & Trailer! 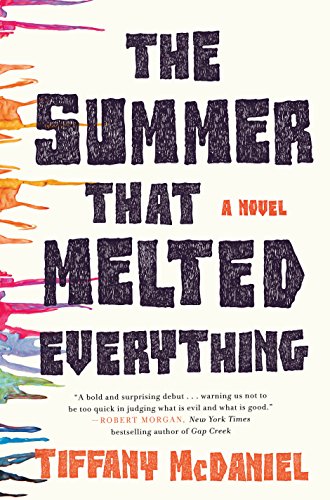 The Summer That Melted Everything
by Tiffany McDaniel

Fielding Bliss has never forgotten the summer of 1984: the year a heat wave scorched Breathed, Ohio. The year he became friends with the devil.
Sal seems to appear out of nowhere - a bruised and tattered thirteen-year-old boy claiming to be the devil himself answering an invitation. Fielding Bliss, the son of a local prosecutor, brings him home where he's welcomed into the Bliss family, assuming he's a runaway from a nearby farm town.
When word spreads that the devil has come to Breathed, not everyone is happy to welcome this self-proclaimed fallen angel. Murmurs follow him and tensions rise, along with the temperatures as an unbearable heat wave rolls into town right along with him. As strange accidents start to occur, riled by the feverish heat, some in the town start to believe that Sal is exactly who he claims to be. While the Bliss family wrestles with their own personal demons, a fanatic drives the town to the brink of a catastrophe that will change this sleepy Ohio backwater forever.

The Summer That Melted Everything by Tiffany McDaniel

Like the stifling heat that made simply breathing almost impossible, The Summer That Melted Everything by Tiffany McDaniel tells of a bigoted small town, an invitation and a young black boy who became a symbol for all that is wrong in the world. Disasters and tragedies follow that fateful summer and forever one town and its inhabitants will be changed forever.

Told through the memories of Fielding Bliss, the summer of 1984 became the summer his father invited the devil to come to Breathed, Ohio and young Fielding befriended the small black boy he thought was the devil coming in response. This is the story of the summer that bared the true hideous nature of humanity at its worst.

Does the devil live in all of us? Are we fooling ourselves to think he is an individual, separate from our own selves? The actions and events of that fateful summer proves that there is evil in ignorance and intolerance of the differences when small minds follow blindly like sheep.

Written in a very authentic and molasses-thick style, Ms. McDaniel gives her characters dialogue a very difficult to read, but very easy to hear cadence. As I read, I was held in horror at the extent to which people will go in their blind ignorance. This is not a read for entertainment or pleasure, it is a dark read that indicts us all for transgressions against others. Each page feels heavy and as stifling as the scorching summer this town endured. What it did to the narrator and his stance on life is as unforgivable as his lack of ambition to learn from the past and to stand up for what is right.

If you are looking for a thought-provoking read or one to debate and discuss with others, The Summer That Melted Everything should spark intelligent dialogue.

Q.   When did you first decide to write and have it as a career?
A.  As a child, writing was the first thing I remember doing without being told to do so.  Writing is my compass.  I’m lost without it.  I wouldn’t realize writing was a profession I could have until I was in middle school and the guidance counselor came to my class to talk to us about what we wanted to be when we got older.  Writing was just so wonderful to me I didn’t think you could get paid to do it.  My parents had jobs, very hard jobs that made them tired and not a lot of money.  So I thought that’s what I would have to do.  Have a job I didn’t like.  Though it took me eleven long years to get a publishing contract, realizing I could have writing as a career, was like being told I could pocket all the stars in the night sky and have light with me forever.
Q.  Has it been a difficult journey to publication for you?
A.  It has been a very difficult journey.  I wrote my first novel when I was eighteen.  I wouldn't get a book contract until I was twenty-nine for The Summer that Melted Everything, which is my fifth or sixth novel written.  It was eleven years of rejection and fear I'd never be published.  This is the narrative so many authors have.  The road to publication can be discouraging and heart-breaking.  To those authors still on that road, I say never give up.  You owe it your characters to keep fighting for their story to be heard.

Q.  Tell us what your novel is about.
A.  The Summer that Melted Everything is about an eighty-four-year-old man named Fielding Bliss, who is looking back on his life during one summer in 1984 when he was thirteen-years-old and his father, Autopsy Bliss, invited the devil to their small town called Breathed, Ohio.  Who answers the invitation ends up being a boy in overalls and bruises.  This boy’s arrival comes the first day of a hell-hot heat-wave that carries through the entire course of the summer.  This is not just a story about the heat, but a story of everything that melted in that heat.  Family, friendships, innocence, and even lives.  Puddles of all of these things melted down.  That is what this story is.  A man trying to survive ferrying these puddles, which to him have become oceans he must cross to once again find the bliss of his name.

Q.  Do you have anything you would like to say to readers?  And where can readers find you?
A.  I would like to say to readers that without you, there are no novelists to be had.  Readers give meaning to an author’s words.  So if you like a book, tell everyone you know.  Be that book’s champion because if you do, you’re being a champion for the author herself.  My only hope is that readers like what I’ve written.  That they can count on me to deliver a story that is worth both their time and their hard-earned money.  Nothing would make me happier than to know a reader has finished one of my books with the pleasure of having read it.  That’s what I strive for as an author.  To be someone’s favorite author as so many authors have been mine.
As far as where readers can find me, I’m not on social media, but they can jump on to my website here at www.tiffanymcdaniel.com
Readers can also connect with me directly through my website.  That connection to readers is very important to me.  As I’ve said, they’re the ones who determine an author’s entire career.  How can I not give them some of my time, when they’ve given me some of their time reading my book?