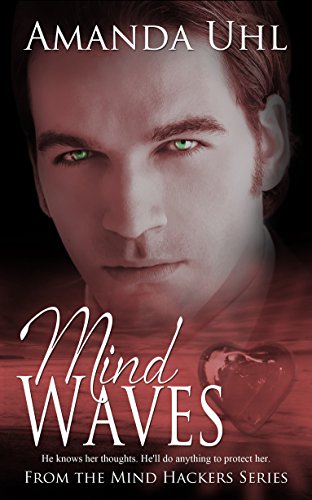 If he can control her mind…
Government operative David Jenkins is skilled at controlling his emotions. Feelings are lethal when your job is to infiltrate minds, erase and implant thoughts, and guard the nation’s intellectual capital. But even he can’t fight his strange attraction to Grace Woznisky. He’ll do whatever it takes to protect her from a madman intent on possessing both their minds. Neither suspect their dangerous enemy has a larger motive, and David may be Grace’s only chance for survival.

Can he control her heart?
All freelance artist Grace wants is steady-paying work and to see her flighty sister to the altar. But after David offers her a job, she finds herself in the middle of a mental tug of war—one that has her reeling from nightmares and fighting for her life. She must decide: Are her growing feelings for her new boss authentic, or is she a victim of his mind-altering abilities?

GIVEAWAY ALERT!
AMANDA UHL HAS A RAFFLECOPTER GIVEAWAY GOING ON THAT ENDS SOON!
FOLLOW THIS LINK TO ENTER!
http://www.rafflecopter.com/rafl/display/0478c8e92/?

Mind control, is it possible to have your memories erased, altered or replaced? Is it possible to change events with one simple invasion of your mind? Is it right, even if the government is behind it and it is for the good of society? As with any special power, there are those who will abuse it, those who seek to control for their own divisive machinations and that is where David Jenkins and his family step in, ready to stop evil in its tracks. Sounds equal parts terrifying and fascinating as Amanda Ulh’s Mind Waves takes control and sends us reeling into a world far from perfect and one extremely powerful mind hacker discovers a woman who does more than just attract him in a fresh take on good versus evil.

Grace is just coming off a bad divorce, and she is determined to never be controlled again. She wants love, real love and fears her feelings for David are being controlled. But she is in danger and becomes a pawn in a battle for power and control. And her hearts seems to know where the safe place to land is.

I give huge kudos to Amand Uhl’s riveting and fresh paranormal tale! She has taken a path rarely followed and made it her own with brilliant plotting, fascinating battles in a realm where minds fight minds. Grace is a riveting heroine, full of determination and a fiery resolve to be her own woman. David appears to have the patience of a saint at times, but I’m not sure I liked the idea of invading one’s personal thoughts!

Looking for adventure, action, romance, chilling mystery and enough twists to keep you guessing the outcome? Ms. Uhl has right here! Definitely an author to watch!

I received an ARC edition from Amanda Uhl in exchange for my honest review.