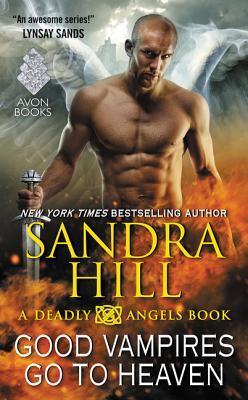 Two-thousand-year-old vampire demon Zeb is supposed to spend eternity turning mortal sinners into bad guy Lucipires like himself. That way, they can grow their numbers and fight the vampire angels known as Vangels. But Zeb is a bad boy in a good way—secretly working as a double agent for none other than St. Michael the Archangel in hopes of one day earning his wings. Problem is, Zeb’s betrayal is discovered.

Until Regina, a foxy, flame-haired Vangel witch on a rescue mission, busts out Zeb, along with three oddball Lucipire witches. Hello, temptation!

Their escape unleashes a war to defeat all Vangels forevermore. In an epic madcap battle between good and evil, a Demon just might earn his wings . . . and spend eternity with the Vangel of his wildest dreams.

This is a story that we’ve all be waiting for, Zeb is finally getting his day in the, well not, sun, because he’s a demon vampire but you get the point.

Zeb, a vampire demon who’s power rivals the most ancients, has been working as a double agent siding with the Vangels. He treachery was finally caught by the Demon Vampires and he has been under Lucifer’s torturess care ever since.

An edict has come down from Archangel Michael that no man should try to break Zeb out, that’s why the witch turned Vangel, Regina is taking up the charge…the sexy Vangel vixen is definitely not a man.

Regina, together with a bad of Lucipire witch misfits she meets along her way into hell, manage to break Zeb out. Zeb’s escape sparks a war that will rival the greatest this world has even seen.

LOL fun, explosive chemistry and heart pulsing action infuse Good Vampires Go to Heaven with the riveting exploits we’ve come to love and expect from Sandra Hill. Hill’s passionate tale provides the perfect adventure for the avid paranormal romance fan while giving you a romance you can really sink your teeth into.

I received this ARC copy of Good Vampires Go To Heaven from Avon in exchange for a honest review. This book is set for publication November 29, 2016.