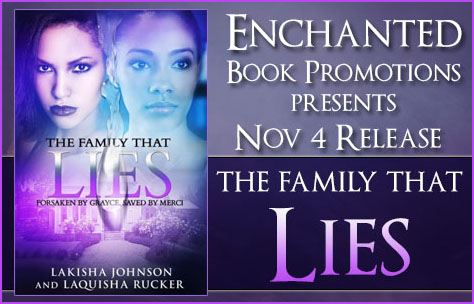 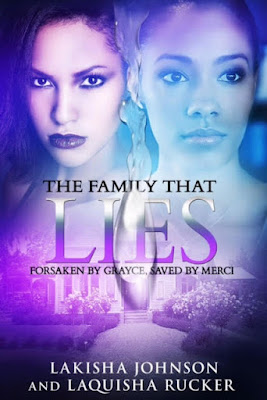 Title: The Family That Lies
Author: Lakisha Johnson
Genre: Urban Fiction / Suspense
Born only months apart, Merci and Grayce Alexander were as close as sisters could get. With a father who thought the world of them, life was good. Until one day everything changed.
While Grayce got love and attention, Merci got all the hell, forcing her to leave home. She never looks back, putting the past behind her until … her sister shows up over a decade later begging for help, bringing all of the forgotten past with her. Merci wasn’t the least bit prepared for what was about to happen next.
Merci realizes, she’s been a part of something much bigger than she’d ever imagined. Yea, every family has their secrets, hidden truths and ties but Merci had no idea she’d been born into the family that lies. 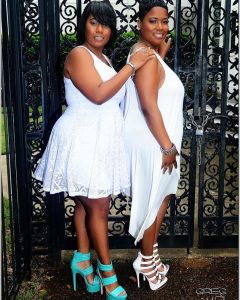 Lakisha Johnson and LaQuisha Rucker are twin sisters from Memphis, TN who are God rooted and family oriented. They’re both wives and mothers who each share different talents. Lakisha preaches God’s word, LaQuisha sings. Yet their twin bond connects them in a way that only twins understand.

Lakisha has written nine books and blogs daily and this is LaQuisha’s first published work. And writing this book, together, was an amazing experience. It is their prayer that readers will enjoy it as much as they’ve enjoyed writing it. They don’t know what God has in store for them as authors but they’re going to enjoy the ride and find out as they are already working on their next book.

Giveaway for 2 eBook copies of The Family That Lies.
Ends November 5
a Rafflecopter giveaway
Posted by Dii at 12:00 PM