It's In His Arms by Shelly Alexander (Red River Valley #4) 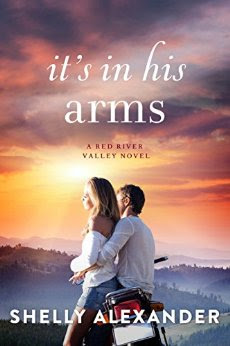 It's In His Arms
by Shelly Alexander

Lorenda Lawson has built a safe, sheltered life for her two young sons since their father was KIA several years ago. She has a beautiful cottage and a support network of family and friends. No one in Red River suspects that her marriage to Cam was ever less than perfect. Nobody, that is, except the gorgeous ex-SEAL who’s shown up after a long absence: Cam’s notorious twin brother, Mitchell.
Mitchell Lawson was a teenage rebel who fled Red River after the local watering hole burned down, choosing the military over jail. Now he has a new mission: making amends with the town and his sheriff father for his hell-raising days, while resisting the woman he’s always wanted. Between Lorenda’s warmth and sensuality and her boys’ mischievous matchmaking ploys, it won’t be easy.
When a string of fires breaks out, suspicious eyes turn toward Mitchell. Lorenda risks her reputation for his sake—but she’ll need to risk her heart, too, to bring this onetime bad boy home for good.

It's In His Arms by Shelly Alexander (Red River Valley #4)

She kept her husband’s memory untarnished, no matter that the Cam she knew wasn’t the hometown hero Red River honored him as. Killed in action, Cam was a soldier through and through, life as a husband and father was an inconvenience, he would rather feed his adrenaline junkie soul than be the man the world believed him to be and Lorenda was too kind-hearted to hurt those who believed in the fantasy of who they wanted Cam to be. Lorenda could live the lie, being the only one in town who knew the truth, until he showed up, like a dark angel in a den of vipers.

Mitchell was Cam’s twin, the rebel, the troublemaker, the one who didn’t care about anyone but himself, the dark to Cam’s light and now, after years, he is back. He fled Red River when he was accused of arson, his choice being jail or the military. Now his years of battling the enemy as well as his inner demons are over, and he has come back to the town who saw him only as an nonredeemable bad seed, especially the Sheriff, who happened to be his father. He also knows the real Cam, no that he intended to tell anyone, besides, who would believe him?

He is a man on a mission, a man hoping to redeem himself by making amends for his youth, but can he take being around the only woman he ever loved? Lorenda fell for his brother and the town wouldn’t look too kindly on him for going after what his heart craves, but two pint-sized cupids are scheming to bring these two together against all odds. Too bad someone hiding in the shadows has other plans.

Can Mitchell mend the pain of the past with his father? To uncover the long held lies would surely finish any chance for reconciliation and destroy Lorenda’s relationship with the town. Whoever said ‘all you need is love,’ must not have known the people of Red River’s unforgiving hearts.

Truly a love story filled with seemingly insurmountable odds, IT’S IN HIS ARMS by Shelly Alexander is as frustrating as it is simply beautiful. In a small town, where one brother was seen as the golden boy and one as the black sheep, secrets were kept as one brother shelters the other out of love and loyalty while being thrown to the wolves by his twin. Ms Alexander dealt with some hot topics and handled them with all of the grace that only a talented author can do. From the unwelcome bad boy coming home to the romance between the widowed sister-in-law, there is enough to wrench at any reader’s heart. This romance is sweet, it is revealing in more ways than one and it includes a past that may not be overcome. High tension, heartbreaking family feuds and the hope for forgiveness, along with Ms. Alexander’s endearing characters make this the perfect read for any romance lover who dreams of heroes and heroines seeking a happy ever after against all odds.

I received an ARC edition from Montlake Romance in exchange for my honest review.