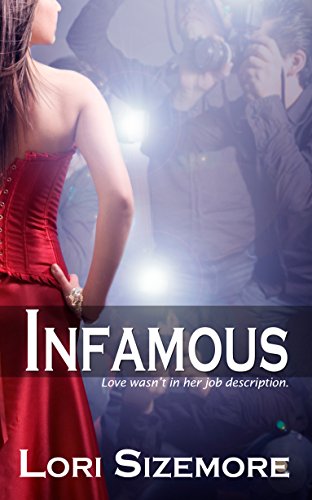 Justine Montgomery, daughter of a divorced beauty queen and TV magnate, is a tabloid disaster after her infamous sex tape. She’s so desperate to help save her family’s home she turns to her deal-making dad. Can she prove to him she’s cut out for a career in television or will she lose it all?

Sawyer has his own past and a successful career is his only goal. Seeing Justine fail would mean the promotion of a lifetime, but things get complicated when he develops feelings for her. Suddenly, the lines between work, life, sex, and love are blurry.

They will have to overcome the bitterness of a rejected ex, the controlling actions of her father, and the half-truths they’re telling one another to forge a lasting partnership both on the job and off the clock.

The life of the rich and famous, or in Justine’s case the INFAMOUS. So maybe Justine has made some bad decisions in life, but with role models like her TV magnate father and her beauty queen mother, I’m thinking she is lucky to be sane! Oh, and she has an ex-boyfriend spreading their most intimate moments with the world in living color and full action glory. When she finds her mother has dug herself into almost a million dollars’ worth of debt, she runs to her father to beg for his financial help. What he gives her is a deal she cannot refuse, work in the industry for him and succeed, or do what he expects and fail miserably.

Sawyer is a man on the rise, and he has a chance for a huge promotion that he thinks will help him forget his past. As Justine’s mentor/partner, all he has to do is help her fail. Little did he know the woman he saw as a fluffy rich princess was one of the most genuine humans to walk the earth, even if her methods are less than industry standard. Justine proposes to pull off the impossible, should he go along for the ride or give in to both his conscience and his heart to help her prove herself to her family, while finding some semblance of pride and accomplishment?

Lori Sizemore has created something the world needs more of- love, laughter and two people who do not wallow in their self-pity over the lives they’ve been given. Sure, there are moments of baring painful truths, but they only serve to make these characters fill each page with their larger-than-life personalities. Justine is the friend you wish you had, always keeping things just off-center and Sawyer was no match for her as he started down that road to love, not that either of them would admit it, of course! Ms. Sizemore fills each page with wonderful story telling as she creates romance when these two least expected it in settings that hold their own quirkiness. I was left smiling and feeling good when I read that final word! Read it! It’s like a ray of sunshine on a cloudy day!

I received this copy from Lori Sizemore in exchange for my honest review.