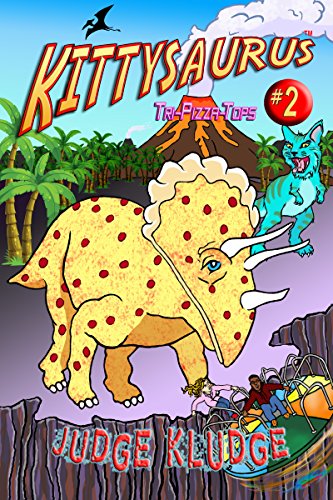 When Clara and Zeke attempt to hatch their rare dinosaur egg and finally prove the existence of Kittysaurus, they must once again face the machinations of the ruthless trillionaire, Myles Vulture.

They soon learn that their only hope of unraveling the secret to hatching the egg will require another trip 145 million years in the past to a lost period of prehistory called the Zanyzoic where every moment is fraught with peril.

Their chances grow slimmer once they discover mysterious creatures plotting against their mission… and the future evolution of humanity.

Kittysaurus is a hilarious adventure, entertaining for middle school students, children and adults!

Things are mysteriously disappearing in Clara’s neighborhood, but clearly she has more important matters on her mind. Who knew how much work it was to hatch an egg? Clara and Zeke are trying in earnest to hatch their Kittysaurus egg, but things aren’t going so well. Clara decides they need to go to the experts, namely a Kittysaurus Rex back in the Zanyzoic era. Their trusty merry-go-round takes them back, but soon they find themselves smack in the middle of a desperate life or death game of cat and mouse until the smell of cheese distracts the Momma Kittysaurus. Who knew the Tri-Pizza-Tops was a challenging enemy to the Kittysaurus? Time to go home, but…someone is plotting against them and that someone may hold more answers than anyone could imagine…including how will Clara and Zeke get home? The plot thickens in TRI-PIZZA-TOPS!

Judge Kludge has another brilliant tale that unleashes even more excitement, fantasy and imagination for younger readers on up! Let your child’s mind run free through time travel, the mystery of dinosaurs and the adventures of two plucky kids who make anything seem possible!

I received this copy from Judge Kludge in exchange for my honest review.