A Change of Heart by Mark Benjamin (The Royal Blood Chronicles, #1) 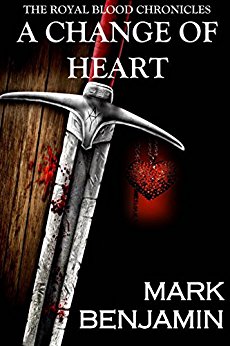 A Change Of Heart
by Mark Benjamin

Bullied his entire life, orphaned university graduate, Gabriel Harper, is bitten by a Royal vampire moments before sunrise, transforming him over the course of six terrible and exhilarating nights into a hybrid—human by day, vampire by night.

Just as he learns to come to grips with what he has become, the Silver Legion—a covert, vampire-hunting organisation—kidnap him and his three friends, forcing them to join their clandestine crusade; however, they remain unaware of Gabriel’s nature until it is too late.

Each choice made sets in motion a turn of devastating events—from love-triangles and fratricide, lust and betrayal, broken dreams and the thirst for power, vengeance and the spilling of blood defines victory.

A CHANGE OF HEART is set primarily in the fictional City of Penance; interweaving the lives of Legionnaires, humans and vampires in the course of a year.

A Change of Heart by Mark Benjamin

Mark Benjamin’s A CHANGE OF HEART is NOT a run of the mill dark and dangerous tale of vampires, their enemies or their lust for power above all else. Do NOT expect to rush through this intense and devilishly detailed tome. Prepare to begin a journey of considerable length, so either plan on an all-nighter or take a day or two off so you will not face the pain of stopping until the very end.

Gabriel Harper was a bully’s delight throughout school, he was the misfit, the nerd, the meek boy who made it easy to target. He was also an orphan living with his doting aunt and monster of an uncle, but he survived with a good heart, loyalty and a moral compass few can achieve. Who knew fate would place a powerful, dying vampire within his grasp w/a razor-sharp bite and the need to leave a piece of himself behind. This began the six most torturous days of his life, but in the end, he was something new, something not quite vampire and not quite human…and this is where this dark tale truly begins as Gabriel is dropped into a world of vampires, forces that would kill them and the unending choices he must make, regardless of the consequences in either world.

As his friends are drawn into his world of the Silver Legion, vampire hunters with a little something extra to give them strength, he is taught that all vampires are evil monsters to be killed, but is this true? What he discovers will rock his very beliefs in humanity and the quest for absolute power, from both sides. There is skillful deceit in the vampire world, brutal deaths, lies and trickery. There are prophecies that would say Gabriel is a savior of sorts, because of his dual nature. One thing for sure, there are lies from both the humans and the vampires and Gabriel must learn who to believe and to follow his heart in all of his actions.

There is strength in Mark Benjamin’s imagination and he puts pen to paper in a strong voice that brings each page, each scene and each character to life (or undead life, or something). He has done a remarkable job of dedicating a chapter for each POV and their voices ring through, from the vile and heartless to the young and innocent to the honestly good. Pick your players, the ones you loath, the ones you love and the ones that have you either sitting on the fence or speechless about, because there are many and no one is an unneeded extra.

Dark, intense and non-stop from start to finish, savor this tale with all of its twists, turns and characters and become a part of a well-written tale.

I received this copy from Mark Benjamin in exchange for my honest review.