Working On It (The Persimmon Series #1) by Cass Alexander 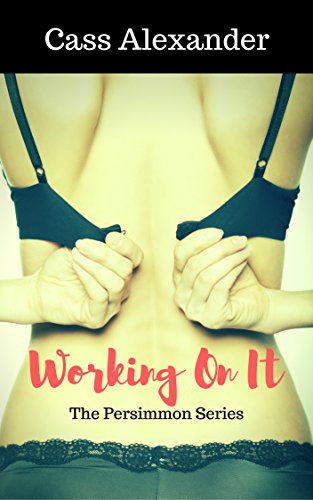 Working On It
by Cass Alexander

Meet Rebecca Banks. Intelligent. Inexperienced. In trouble. She wants someone who already has the perfect girlfriend. But when Evan decides to end his long-term relationship, will Rebecca be brave enough to take a chance on him? Can he see past her shortcomings? Can she? Rebecca’s got a long list of flaws. But she’s working on it.

Working On It is Book 1 of The Persimmon Series. It can be read as a standalone.

Working On It by Cass Alexander

Flat out, best romantic comedy and definitely BEST hysterically funny heroine EVER! Cass Alexander has a true hidden gem on her hands with WORKING ON IT the story of a college student who finally finds the boy of her dreams, only to find herself caught in a game of push me-pull me with her so very tender heart.

Rebeca is no shrinking violet. She can make a sailor blush with her grasp of four letter words. She seriously has NO filters and at her small college, she knows everyone and everyone knows her. With the guys, she is like one of the boys, with no desire to give up that V card until Evan. Evan the boy with a long term girlfriend who is perfect, focused and attending another college this year. Evan, the boy who has become her good friend, makes her laugh and is now making her knees weak. And. This. Is. So. Not. Rebecca.

As the greatest guard of her tender heart, she fights the attraction they both feel. Meanwhile, Evan is making his attraction very obvious and he accepts Rebecca, rough edges and all. He finds her refreshing, endearing and who he can see spending the rest of his life with, a life that would certainly NEVER be dull!

Down to Earth, filled with real-life characters with real-life flaws, this is one of those college romances that crushes the mold and re-invents the joys and pains of young love. Rebecca is priceless, being inside her head is better than visiting every amusement park in the world, as we ride the chutes and ladders of her wit, emotions and promises to herself to “work on” her perceived social flaws! Evan reveals his true self, as opposed to the popular jock he is seen as. Start to finish, this is pure entertainment that both endears us to the characters and gives a great ab workout laughing out loud!

Cass Alexander is an author to watch, read and read some more! Excellent story-telling that does NOT rely on sex to drive her plot, but trust me, she does know how to make those steamy moments as hilarious as us mere humans have experienced! Read it, you’ll thank me later!

I received this copy from Cass Alexander in exchange for my honest review which had me laughing once again, just reliving this tale!!