The Thief by Michele Hauf 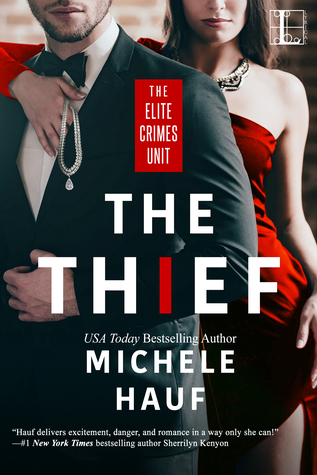 The Elite Crimes Unit works behind the scenes of Interpol—and employs some of the world’s most talented criminal minds. Because as everyone knows, it takes a thief to catch a thief—or to seduce one . . .

The old farmhouse in the French countryside is a refuge for former jewel thief Josephine Deveraux. Admittedly, there aren’t many men in the vicinity, but she has her cat to cuddle up with. It’s a far cry from her former life, constantly running from the law, and she’s enjoying her peace . . . until the intruder in the three-piece suit tackles her. He wants her back in the game, helping with a heist—and he’s not above making threats to get his way.

Little does Josephine know that notorious—and notoriously charming—thief, Xavier Lambert, is after the very same 180-carat prize she’s being blackmailed to steal. To his chagrin, he’s doing it not as a free agent, but as a member of the Elite Crimes Unit—the team he was forced to join when his brilliant career came to a sudden end. And little does Xavier know that his comeback is about to include a stranger’s kiss, a stinging slap, and a hunt for missing treasure—along with the infuriatingly sexy woman who’s outfoxing him . . .

The Thief by Michele Hauf

Retired thief, Josephine Deveraux is blackmailed by an ex, back into the life to steal a notorious diamond. When she goes for her prize she is interrupted by Xavier Lambert, another thief who was supposed to be in jail after getting caught doing a heist a few years earlier.

The diamond they both were after is the key to a terrorist plot. Xavier was after the jewel because he is working off his jail time as a member of an Elite Crimes Unit. Xavier is given permission to retrieve the diamond so he pushes Josephine into helping him.

The thrill and Xavier entices Josephine.

Xavier is drawn to this thief but he knows his life is tied to the Elite Crime Unit and doesn’t want to get Josephine caught up in their web as well.

The story starts out strong with a cast of characters that you want to really get to know. I loved the semi-anti-hero, high end thief turned into special ops agent idea. I was all in and loving it and for the most part I kept loving it but...their seemed to be a few twists that were thrown in in the end that didn't seem necessary and/or over kill in my opinion. Still a really great read and I would highly recommend The Thief to anyone who enjoys a good romantic suspense.

I received this ARC copy of THE THIEF from Kensington Books. This is my honest and voluntary review. THE THIEF is set for publication April 11, 2017.