Wanions of the Wicked by Romarin Demetri (The Supernatural London Underground, #3) 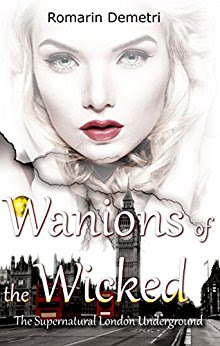 A treaty of protection. An end-all prophecy. A forbidden love. A family curse.

A wanion is an oath, a wish, a promise, or a vendetta, and in the third installment of the Supernatural London Underground, London’s favorite group of supernatural misfits are forced to come to terms with theirs.

The chance to free London from supernatural suppression was never a choice for Romarin Demetri, or for her friends and housemates, who shared a horror she has only heard about in a few unguarded moments. When an elite group of assassins is contracted to thwart their plans of liberating people from another experimental laboratory, their ultimate goal is forcibly stalled¬¬¬— allowing time for pleasant distractions, other worldly experiences, and situations that can’t help but make them feel human. Now that her friends finally have to face their horrible pasts, Romarin finds herself willingly walking into an insidious trap that plays out her own worst fears.

Wanions of the Wicked by Romarin Demetri
(The Supernatural London Underground, #3)

As Romarin adjusts to life in the castle among her new supernatural family, internal upheavals will rock the already tenuous threads that hold this “family” together.  Even Romarin’s heart will be tested as the one she loves runs hot and cold with her. The London Supernatural Underground must be saved from suppression and these unlikely allies are determined to never let others feel the injustices they have suffered through.

Romarin has always be different, her powers intense and she struggles to come to terms with them, almost as if they were never meant to be, but when the truth is revealed, She must make a decision, lose the battle for all or accept her darkest nightmare.

Author Romarin Demetri is back with WANIONS OF THE WICKED with more tension, more danger and more outside involvement as a prophecy threatens the existence of all and Romarin may be caught in the vortex of fate, love and loyalty to those around her. Another experimental and vile laboratory has been found and the goal is to free the victims of its depravity, until assassins are hired to take Romarin and her friends down.  Changelings, psychics, vampires and more must join forces to defeat the evil that hunts them. Are they prepared for what lay ahead? Is Romarin ready to make the ultimate sacrifice to protect those around her?

Once again, Romarin Demetri brings forth a dark urban fantasy that still manages to hold some light-hearted moments, twisted plots and sub-plots and non-stop tension throughout! Hang on for some bigtime emotional upheavals, moments of sweet romance and an ending that will twist you inside out!
Posted by Dii at 1:24 PM