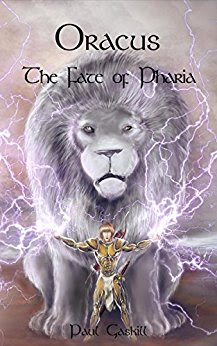 The Fate of Pharia is the third novel of Paul Gaskill's young-adult fantasy trilogy.

As the war builds to its climax, Oracus' attention is divided between plotting the death of the evil King Jowra and banishing the ruthless Fizorachis from the land.

His powers have grown stronger, and so too has his Lavorian, but one tiny mistake will lead to failure and the destruction of everything he knows.

The future of Pharia lies in Oracus' hands. Will he succeed?

They say Three times is the charm and for author Paul Gaskill and his readers that couldn’t be more true! The trilogy finale, THE FATE OF PHARIA brings Oracus’ adventure to an end, or, is it just the beginning of a new era in his life?

Oracus walks a tightrope of responsibilities as the world he loves further depends on his powers to defeat King Jowra. Although both he and Bander have grown stronger and their bond is viselike, one false move, one tiny misstep and all could be lost. It has become survival of the strongest. Oracus is the one with the most true allies, the one who has earned the trust of the races, but do they have faith that he can out maneuver the dark magic of the king?

As races that were once enemies learn to trust, will they put their lives in the hands of a young man still learning his powers? Sometimes it takes the strength of teamwork to be a conqueror that the masses will believe in. Is Oracus ready to share the burden he has carried throughout?

We have watched an innocent and naive young man grow and morph into a warrior of honor and strength. We have witnessed the best and worst of humanity and the other races. We have watched ignorance be banished and readers have found two heroes to remember while asking ourselves, how far would we go to save our land?

Paul Gaskill has written a trilogy of hidden gems that should be added to bookshelves and placed in the hands of Young adult readers everywhere!

I received this copy from Paul Gaskill in exchange for my honest and voluntary review.