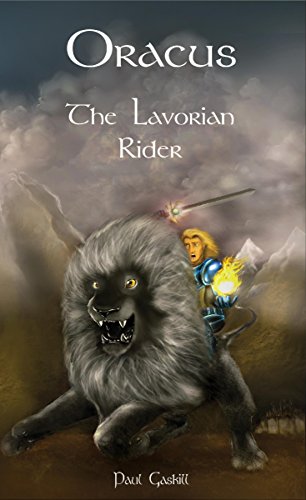 The Lavorian Rider is the first novel of Paul Gaskill's young-adult fantasy trilogy.

From living in a small village where knowledge of the King's dictatorial reign is unknown, Oracus' ordinary life is turned upside down when he forges a bond with a Lavorian and becomes its Rider. When the King's soldiers seize the village and kill his father, Oracus joins the rebellion and endeavours to exact his vengeance. With a Lavorian by his side, he becomes a vital factor in the war that will determine the land's fate.

Can Oracus survive and help to end the King's tyranny?

He was a young man, unaware of the world outside of his secluded village. The king didn’t know his village existed, which is probably why their lives were so idyllic. When Oracus was out hunting, a strange light appeared, along with a beautiful and mysterious woman and from that day on, Oracus’ life would never be the same. The stories and legends he had heard were about to become part of his reality, but not until he faced the greatest devastation and loss of his life.

A legendary creature of great power has chosen him to be his Rider. His Lavorian has found him and their bond will become unbreakable as they become one, lion and Man, filled with magical powers they will share. Little did Oracus know he would become a warrior who could help end the tyranny of a king gone bad. So many secrets have been kept from him and now it is his turn to keep the ugliness of the world away from the innocents and those he loves. The world’s fate is in his hands, can he survive long enough to meet the challenge?

Paul Gaskill’s THE LAVORIAN RIDER the first part of a spellbinding trilogy of adventure, coming of age and fantasy at its finest follows Oracus as his world spins out of control while he searches for where he belongs and how he can best serve his people. The weight of the world will rest on Oracus’ shoulders as this young adult fantasy/adventure unfolds with all the rich detail Paul Gaskill can give.

Feel the fear of youth, the bravado and the daring of rebels determined to make the world right. Enter the battles, both from within and all around as blood is shed, and a reluctant hero is born!
Start to finish, Paul Gaskill writes with a skill that will both draw readers in and hold them glued to each page! What better audience than youth to feel the rush of attempting the impossible while hiding doubt within? Highly, highly recommended for any age, but definitely any child who dares to imagine other worlds and other times!

I received this copy from Paul Gaskill in exchange for my honest and voluntary review.