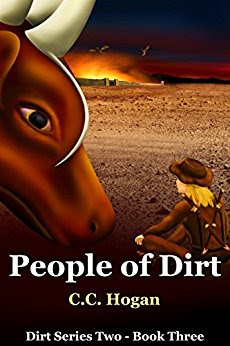 People of Dirt
by C.C. Hogan

Don, the capital of the beautiful country of Sarn is besieged by the armies of Lefton and Tol Nalan and the icy winds that are blowing down from the north.

Preland is in the grip of the worst winter anyone can remember in hundreds of years, and from beyond the Red Mountains, a wagon train arrives, sent by the king of Wone. The people of the north are freezing to death and running of out of food. They need help, help that only the dragons can provide. But it will take hundreds of them; Mistry must send to Angyn for help.

And beyond the storms, the vile True Path are allying with Categan. When the winter is over, they will head south intent on wiping out the dragons and building their new empire.

Not for the first time, Silvi finds herself at the front, being compared to her great father, General Johnson Farthing. But can this young woman lead an army? Can she defeat this terrible foe?

People of Dirt is the dramatic finale of Dirt, series two.

This is raw truth time. I am an avid reader, I have no specific favorite genre, I prefer each tale to stand on its own merit, each author to invite me into their stories, meet their characters and connect with them. I hope that I will remember the story long after I have finished, that it made an impression on me, and that I could feel the heart and soul the author poured into their work, hear them telling their tale. C.C. Hogan wrote this series just for me, and every other lover of great reading!

C.C. Hogan’s Dirt series may look like a clever fantasy saga, but trust me, it is more, so much more. It spans centuries, remembers its roots and honors fallen heroes. This time out with the PEOPLE OF DIRT C.C. Hogan had me laughing a time or two and definitely made me cry, all because I have more than connected with each character, they came to life, flawed, unsure, but determined to do the right thing for a good cause, peace on Dirt.

Once again, war has come to Dirt. Greed and the thirst for power being the motivator and once again, a Farthing will lead the charge, become the rallying point and once again, the dragons will return to aid their human friends, no matter the cost. Battle after bloody battle, heroes will die, innocents will be saved from tyranny and through it all, the magic of this world will bring “ancients” into the fray, mere humans with more heart than one has ever witnessed and the peace loving dragons will step up and play a major offensive role, but not without consequence to themselves.

Love will be found, lost friends remembered and bonds created that will breach the prejudices that living isolated will bring. Will this be the final battle to ensure peace, safety and equality for all?
From start to finish, this addition to the Dirt series is filled with action, filled with emotion and no character is flawless, but they all work together to shore each other up. Bittersweet love will also find its way into the story, even as humanity shows its warts and scars.

I found the dragons were truly the stars in so many ways, their kind relies on honesty, sincerity and truthfulness. They really do not understand humanity’s penchant to take and take. Some of the finest advice comes from these dragons who talk. Don’t picture cartoon caricatures, picture regal giants with a sense of honor that seems to fail humanity at times, but also enjoy their wicked sense of humor, their banter and feel the love they have for their special rider. I found myself forgetting who was human and who was dragon as dialogue was shared.

Seriously, if you are unsure about investing your time in a series that has many books, forget that, try book one and go from there. They are intense, eloquently detailed, yet not stuffy or stiff, and the dragons, you will love the dragons! C.C. Hogan even does his own covers and they relate perfectly to each book! Now that is an author who has invested himself in entertaining the world! This is more than a hidden gem of a series, this is the whole freaking diamond mine!

I received this copy from C.C. Hogan in exchange for my honest and voluntary review.