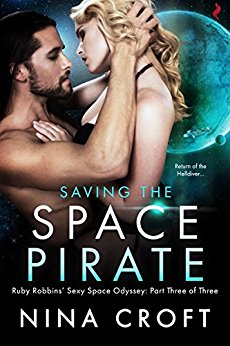 A few days ago, in a galaxy right here...

The earth faces total annihilation and one young woman signs up for a mission to rescue humanity. Only she ends up getting rescued herself, by a gorgeous space pirate. And the sex is out of this world!

Killian Sharpe, is in over his head. One minute, he’s a notorious space pirate with a price on his head. And now, he’s suddenly become one of the good guys. How did that happen? He can only think of one reason – sexy, spunky Ruby Robbins.

Ruby is thrilled that her mission is almost over. Not only will she have saved her planet, but she’ll finally be able to live happily ever after with the space pirate of her dreams.

But a tragic twist suddenly puts everything into jeopardy. And it’s up to Ruby, with Killian at her side, to change to world for good this time. She can only hope they both survive the ordeal…

Ruby’s mission is coming to an end and all she and Killian have to do is to stay alive long enough to complete it. Has the determined Ruby found a hero in Killian, the former bad guy with a rep to uphold? Will these two find their HEA or will fate step in once again and threaten to extinguish the flames these two ignite together? Ruby may have to perform one more act of mercy to save a friend in need, is she up to the challenge after her slavery ordeals?

Nina Croft has found her passion niche and her two main characters provide all the sex anyone could want in the blink of an eye. Are they celebrating the joy of life or grabbing one more toss in the hay because the action can wait? SAVING THE SPACE PIRATE combines the bare bones of what could be a fabulous plot with the bare bones of the main characters, along with every other part of their anatomy. For me, it missed the mark of a better than just okay when the sex failed to draw me in and I couldn’t wait for it to be over in hopes of getting some plot tossed in.

I am always intrigued when an author flexes their creative muscles by walking on the wild side, but I am a little worried that Nina Croft may have gone a little over the edge of Planet Thriller with this series.

I received an ARC edition from Entangled in exchange for my honest review.