Dances of Deception by J.C. Kang (The Dragon Songs Saga #3) 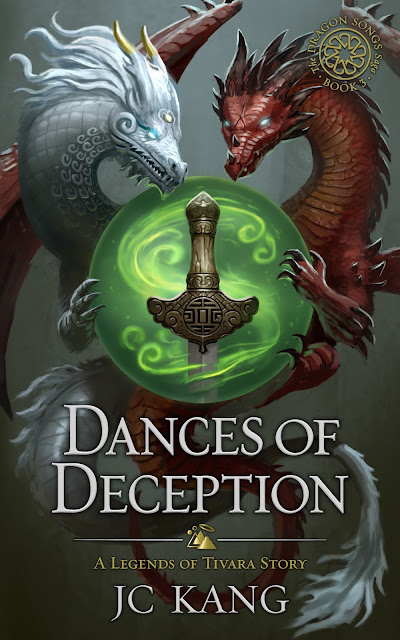 Dances of Deception
by J.C. Kang

The world knows Kaiya as the Dragon Charmer.

After vanquishing the Last Dragon with the power of her voice, all she wants is to return to a quiet life of anonymity. Instead, the Emperor tasks her with an onerous task: negotiating with the aggressive Teleri Empire for the extradition of her cousin, who tried to murder the imperial family and usurp the Dragon Throne.

The mission reunites her with her childhood friend Tian, now an assassin-spy who loathes killing. He is no longer the adorable, gullible boy from her memories, any more than she is the adventurous, sweet girl from his. Instead of rekindling nostalgia for a youthful innocence they both yearn for, their reunion ignites a mutual hatred.

When the Teleri Empire breaks off negotiations, Tian must help Kaiya escape. Orcs, Ogres, and enemy soldiers stand between them and home, and their volatile relationship could get them captured… or killed.

Dances of Deception by J.C. Kang (The Dragon Songs Saga #3)

Can anyone be trusted or will Kaiya need to rely on her inner growth to protect herself and those she loves? Will this be the end of her innocence about the realities of the world around her? She may be able to sing a dragon to sleep, but she is ill-prepared for what atrocities await her. DANCES OF DECEPTION by J.C. Kang takes us deeper into Kaiya’s troubled world where monsters lie in wait, and their viciousness and depravities know no bounds.

Princess Kaiya will be reunited with Tian as she is sent on a mission of peace with the warmongering Teleri Empire. The Tian she knew is gone, in his place is a man of powerful convictions and steely determination, an assassin without the heart to kill, a spy who misses nothing. The friendship they shared as children is sorely tested as the brutality of the world Kaiya is plunged into is as far from her comfort zone and delicate upbringing as could be imagined. Like a Phoenix, Kaiya will rise a sadder, but wiser young woman, who will give her life to keep her world safe. What she will endure will be far more heartrending than she could have ever dreamed of in her darkest nightmares and it is far too real to be prepared for. Heroes will die, new ones will emerge and the world will be forever changed as a long lost love is rekindled from the despair all around. Sometimes the sacrifices made never end, but they will always leave scars.

J.C. Kang’s world comes alive once again with scenes that jump off the pages and become real. Brilliant dialogue runs throughout as if this talented author lived each page himself. The feel of “otherness” still saturates each page as we traverse a world of both magnificence and malevolence.

Each addition to this epic series has built on its predecessor and only increases the magnetic pull for readers. I was moved to tears at one point, raging anger and sat in awe of the strength of these characters against all odds. Another hidden gem for me and I loved it!

I received this copy from J.C. Kang in exchange for my honest and voluntary review.