The Buried Symbol by Jeffrey L. Kohanek (Runes of Issalia, #1) 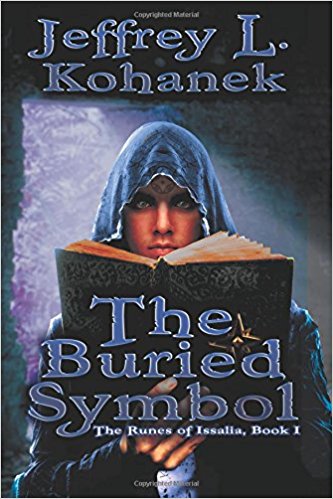 Discover a lost magic, long buried and forgotten...
Without a rune marking his role in society, Brock is doomed to a life below the lowest rung of the social ladder. Unwilling to accept his fate, the teen risks his life to obtain a fake rune that marks him as a member of the Empire's ruling class. He then embarks on a quest to join an institution where the Empire's future leaders are trained.
As a student of the Academy, he soon uncovers a chain of secrets kept hidden for centuries, secrets that expose cracks in the foundation of Empire society. Among his discoveries is a powerful magic, long buried and forgotten.
Brock's compassion and sense of justice are seeds that sprout tight friendships and a blossoming romance. An unwillingness to be bullied earns him a dangerous enemy, growing into a feud that escalates to a climactic showdown.

The Buried Symbol by Jeffrey L. Kohanek
(Runes of Issalia, #1)

Meet your next unsuspecting and unlikely hero. In Brock’s society, individuals are marked to show their status in life, as well as their vocations, talents and gifts. Those left unmarked are the social cast-offs and must rely on thievery, pity and sheer luck to survive. But are they really useless members of society, destined to be worthless and frowned upon?

Brock is unmarked, yet he longs for a better life, he just knows there is more for him out there and he wants the chance to prove himself. Some stolen money, and shifty deal and an unauthorized ruin tattoo will give him that chance, IF he isn’t caught in his own web of deceit.

Now marked as a member of the Empire’s ruling class, he begins a journey that will take him to the Academy, where the best of the best are educated and the darkest of secrets have been hidden and the truths of the unmarked are revealed along with a powerful magic that has been long hidden.
THE BURIED SYMBOL by Jeffrey L. Kohanek brings this tale to life with characters that are innocent, misinformed, forced to be molded into a Fate that may never have been meant for them and force-fed the bias of prejudice that has endured for centuries. Meet the heroes you want to emulate, feel their compassion, their innocent zest for fairness and equality and discover that even heroes are human.

Brock is “that” boy, the one who is meant for a greatness denied him by the powers that rule. Follow his daring journey, his “education” at the Academy and meet the enemies as well as friends he has made along the way. Feel his confusion at the discovery of his “power” and what it means, how he uses it and how, even he can make mistakes.

Jeffrey L. Kohanek has created a fantasy for all ages, I would almost recommend it to Middlegrade readers where reading isn’t always the joy it should be, BUT, perhaps this is best left to more mature young adults as these are “very real” teens. Powerful story telling that releases the imagination to live in another world, to feel the awe of new places, the fear of discovery, the determination to stand tall and the heart to set things right in a world of small-minded power mongers and monsters.

Mr. Kohanek has put his pen to paper and created a must-read fantasy that reveals people at their best, worst and most vulnerable as one boy becomes the force for change in the best ways.

I received this copy from Jeffrey L. Kohanek in exchange for my honest and voluntary review.
Posted by Dii at 8:22 AM