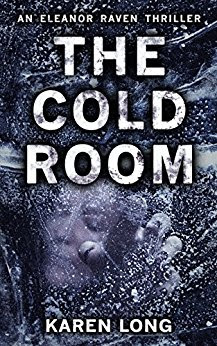 The Cold Room
by Karen Long

The brand new thriller that will keep you on the edge of your seat from the author of The Safe Word and The Vault.

Winter is settling on Toronto and a series of seemingly unconnected murders are weighing heavily on DI Eleanor Raven. When an army veteran holds his family hostage, leaving chaos and an unidentifiable skeletal human hand in his wake, Raven is left tangled in a web of leads, lies and secrets, with each thread leading her closer to the all too terrifying truth.

But with time running out, Raven needs to re-connect with her past life – the one she thought she’d finally escaped from – if she’s to find out who the killer is before they strike again . . .

Its thriller time and Karen Long has produced a true gut-clenching and dark page turner that had me hanging on for dear life at every wicked turn. The weather is cold, the murders are brutal and cold, and DI Eleanor Raven’s blood runs cold as the bodies pile up and she must play connect the bloody drops while fighting the bureacy of the police department, her own inner demons and the calculating deceit that is threatening to take her down. Is there a connection with her past, a case that brought her emotionally to the brink?

THE COLD ROOM is a chilling tale filled with raw descriptions, stark scenes and an uphill battle for DI Raven. Although part of a series, I read this as a standalone and was pleased to find that there is some background to fill in many blanks, but I have a feeling this is a series someone wouldn't want to miss from the beginning!

Ms. Long uses a bold and gritty style of writing that true crime thriller readers will devour in no time. Do you like an entangled plot, dissected by a dark subplot? Like to follow the clues and see if you are cut out to get down in the trenches of murder, elbow deep in the worst of it? Follow DI Raven as she must hurdle a plot that will leave no one from suspicion. What lies will money or blackmail buy? When the dust settles are there really any undamaged heroes?

DI Raven is a woman on a mission, inwardly wounded, but like a dog with a bone, she will worry this one to the end, no matter who tries to stop her. Dark, gritty and filled with non-stop suspense. Try it, but only if you like your heroines tough with a side of compassion for humanity.

I received an ARC edition from Karen Long in exchange for my honest and voluntary review.
Posted by Dii at 8:57 PM