The Emblem Throne by Jeffrey L. Kohanek (The Runes of Issalia, #2) 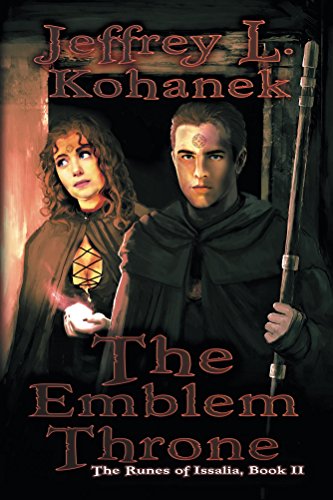 Embark on a quest to save the world...

As they strive to become Masters within the Ministry, Brock and his friends resume their training at the Academy, an institution founded on magic, science, knowledge, law, and combat. They soon discover an expansive web of conspiracies and deceit within the Ministry, hidden behind a veil of benevolence and piety. The exposure of one of those secrets forces Brock and his friends to flee the institution with their lives in the balance.


Joined by a fierce Tantarri warrior, the group embarks on a quest to locate a mysterious throne that has been lost for centuries. Guided by the cryptic words of an ancient prophecy, and backed by a forbidden magic that they are still learning to wield, they journey across the continent to save humanity from extinction.

The Emblem Throne by Jeffrey L. Kohanek
(The Runes of Issalia, #2)

The world is on the verge of extinction and the knowledge to defeat evil hides within the cryptic words of an ancient prophecy and the discovery of a throne long hidden from human eyes.Brock has returned to the Academy in order to earn the right to be called a Master within the Ministry. When the very Ministry they strive to emulate is vile and corrupt and Brock’s secret is uncovered, the group must run for their very lives as the clock ticks down on world destruction and domination by powers of a monstrous darkness.

THE EMBLEM THRONE must be found, its powers uncovered and a secret group must be stopped. The quest will be difficult, bloody and the cost of honor will be high, but through it all Brock will stand strong for his friends and allies, in spite of the guilt he carries when friends are asked to make the ultimate sacrifice. Heroes will fall, betrayal will come from ones that should be protectors and the group’s untamed powers will threaten to explode as new allies join forces to staunch the evil hordes that raise their murderous numbers in a blood bath of terror and fear. The journey will be long, the path fraught with danger and there will be times when our heroes question themselves, while never doubting the righteousness of their quest, as once again, Brock is asked to assume the mantel of leader and carry the weight of survival on his young shoulders.

Jeffrey L. Kohanek’s second book in The Runes of Issalia saga has ramped up the action, the doubts and fears and raises one young man to heights of greatness and daring he never asked for.
All Brock ever wanted was to reach his potential in life, to be free and equal to others and now he is mastering the art of the rune magic and unleashing the power of good, balancing chaos and order for the good of his world…has he gotten his wish or far more than he bargained for?

Mr. Kohanek has built a world of make believe that becomes completely believable and alive for me as I felt my heart break, race and thrill within the kaleidoscope of each tension-filled scene. Heroes are not born, they are made from circumstance and the true ones rise to the occasion regardless of the obstacles and unknown darkness placed in their path. They share in the unasked for glory and Jeffrey L. Kohanek imbued his characters with the grace of true heroes. Pick up this series, for you or a young adult, you’ll thank Mr. Kohanek for writing this amazing fantasy.

I received this copy from Jeffrey L. Kohanek in exchange for my honest review.