The Indigo Rebels by Ellie Midwood 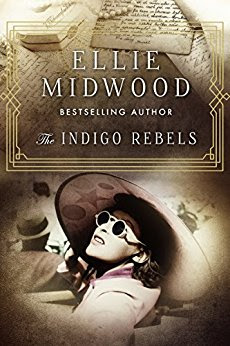 The Indigo Rebels
by Ellie Midwood

The German army has marched into Paris. Three siblings, three very different people leading very different lives, find themselves face to face with new occupants of their city, and none of them can guess what the occupation has in store for them, and how it will change their lives once and for all.

Giselle Legrand, a renowned novelist and a socialite, encounters an unannounced guest in her apartment – a newly arrived chief of the Gestapo, Sturmbannführer Dr. Karl Wünsche, who is intended to billet there and who soon starts making rather unwelcome changes in Giselle’s lifestyle. Strong-willed and defiant, Giselle gets involved with one of the first Resistance cells, refusing to submit to the newly established authority despite the developing relationship between the two.

Kamille Blanchard, a new widow of the war left alone with a small daughter, is dreading the approaching army. However, she never expected that she could find love in the arms of an officer, who appears at her door as soon as the German army marches in. But will Kamille be able to trust a former enemy when he has to choose between his feelings and the duty for his country?

Marcel Legrand, a former history student and a deserter, fearing the capture by the Germans has no other choice than ask for the help from the ones he used to fear and avoid – the mysterious communists, who call for an uprising and freeing their country from the Nazi plague.

Soon, the fates of all three siblings will become intertwined in a dangerous knot, all of them, fighting for the same goal: a liberated France.

The Indigo Rebels by Ellie Midwood

History tells us of the horrors of the brutal killing machines bulldozing across Europe during World War II. The Nazis were brutal, they did unspeakable things and nothing was too low or inhuman to do to those they conquered. But that was the Nazi machine, not the individual soldiers who were part of history’s ugliest moments.

Three French siblings, each as different as night and day, but each of them will find a role to play as the Germans invade France and turn the country into a police state where neighbors fear neighbors and all human rights are extinguished.

As a machine, the Nazis are monsters, but this tale is about the human side of war, of how far people will go to save their country as well as their very lives. It is also a story of love and companionship, of living with the enemy and seeing them as just another human with a cause they believe in and a job to do, a job where failure is not an option.

Kamille is a young mother and widow forced to share her home with a German officer, only to find there was a kind heart buried beneath the swastika on his uniform. Marcel is not a fighter, but he finds himself part of an underground group of communist rebels who vow to chip away at the invaders and take back their homeland. Their colorful sister is a successful novelist, a free spirit and a woman of strong convictions who will ride the edge of the envelope of life without a second thought, even as a cold and powerful German Officer makes her home his and tempts her with his intelligence and strength.

Three lives among the millions, but these lives and the events they are part of make up one of the most brutal times in modern history. Will their lives be forgotten or will they leave their mark on both their homeland and their enemies, no matter the cost?

Ellie Midwood’s THE INDIGO REBELS is a tale of rebellion, conviction and a desperate need to change the course of what we now know as history. Rich with the atmosphere of the 1940s, I almost saw this tale play out in black and white, scratchy films and all. Feel the fear, the loss of innocence on both sides and the determination to hang on to the humanity they once knew. How far will these three go to survive? Is it possible that there was some humanity within the armies of the Third Reich? Dark, gritty and filled with a tension and fear we can only hope we never witness again, Ms. Midwood’s fictionalized version of history should be a must read for history buffs looking for something less dry and impersonal as well as readers looking for high-quality reading.

I received this copy from Ellie Midwood in exchange for my honest review.