Working With It by Cass Alexander 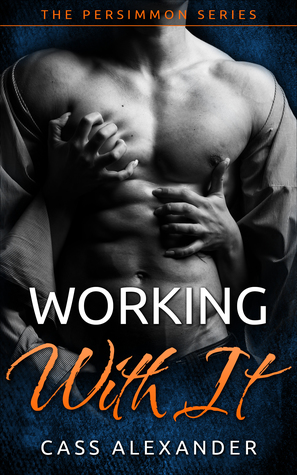 Working With It
by Cass Alexander

Morgan Pottinger is counting the days until graduation. Her plans are to leave small town Kentucky and never look back. As she starts her senior year at Persimmon College, she finds herself the object of Nate Stevenson’s affections. Despite her spaz-like tendencies, Nate makes it clear he wants her. Morgan cannot resist the sexy, intelligent guy that keeps her on her toes and ties her up in knots.


There’s just one problem. Morgan needs to break up with her hometown boyfriend before pursuing anything with Nate. A series of catastrophes back home continuously interfere with her attempts to end the relationship. At this rate, she’ll be married to the loser by March and Nate will be just another casualty in the disaster that is her life. Lucky for Morgan, Nate’s much smarter than she is.

Working With It by Cass Alexander

I see London, I see France…What is the most embarrassing thing you have ever faced? Who saw the event? For Morgan, let’s just say that short of toilet paper on her shoes, this was probably one of the worst things ever to happen and it is witnessed by none other than Nate Stevenson, school Brainiac, boy genius and total hottie. Oh yes, her senior year at Persimmon College is off and running.

For Morgan, her senior year at Persimmon was it, the last hurrah and her ticket out of her small town home in Kentucky. She never thought this final year would be one of the most life-changing times of her life. Okay, she hasn’t miraculously become a vision of grace and poise, she’s still a spaz, but apparently when it comes to love, even Cupid has a sense of humor although his timing could be a little be it better.

She wants Nate, he wants her, but there is a major road block and it is up to Morgan to be honest and break up with Alex, the boy she knows is all wrong for her, the boy she has outgrown and the boy she just can’t quite seem to say good-bye to. It isn’t that she hasn’t tried, but there seems to be a communication barrier that gets even more twisted when a drunken stunt comes close to costing Alex his very life.

Follow Morgan’s heartache, joys and less than stellar moments as seen through her eyes and from within the tornado that is her mind! Once again, Cass Alexander uses humor, attitude and snark to deal with some of life’s tougher moments, making them equally endearing and entertaining. No, no, human hearts will NOT be sacrificed for our reading pleasure, what could be a completely heartbreaking tale of guilt and pain will become a journey to freedom, growth and love! And did I mention HUMOR? The trip into Morgan's brain is priceless!

I received an ARC edition from Cass Alexander in exchange for my honest review.