Contingent Upon Magenta by C. Drying 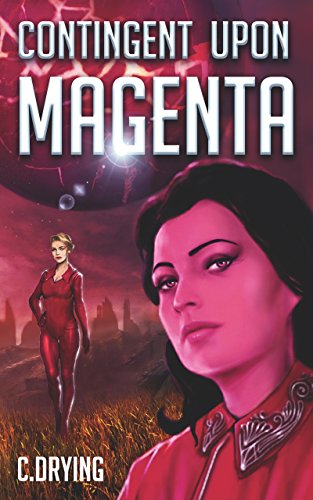 Contingent Upon Magenta
by C. Drying

An unprovoked attack on Earth prompts the U.S. military to send a small contingent to assassinate the matriarch of a world where mothers and daughters are exalted. A dissenting citizen from the world provides the U.S. military with guidance by insisting a female be an operative in the contingent. Captain Joan Jones is the operative. She’s a mother of a young daughter and is conflicted and torn by her call to duty. The contingent faces a barrage of unexpected events while Captain Jones becomes captivated by the Magentan matriarch. Will Captain Jones’ maternal instincts fail or save the contingent?

Character quotes:
“The mother of invention is a very well-endowed woman, and she has been suckling technology forever at her perpetually full breasts.” —Eldora Ma

“Progress is not alone a matter of technology.” —Maerora Ma

“Too many dissenters dilute the potency of progress.” —Maerora Ma

Contingent Upon Magenta by C. Drying

The Earth has been attacked by aliens and the U.S. decides its payback time and this time, they think their plan is foolproof. This time the assassin will be a woman. Who better to infiltrate a matriarchal society? Who better to gain a chance to get close to the female leader? Too bad the idea came from a disenchanted alien, but is he right? Captain Joan Jones is willing to die for a place in history as a strong woman in a world where men seem to get the accolades more often than not.

Things do not go according to plan as the three-person crew lands on Magentan soil and Joan is severely injured, but her two male allies manage to hide away, as part of 'plan B.' What Jones didn’t count on was finding more that interested her about the Magentan ruler than breaking her lavender neck, like her potential as a lover. Plus, there are more secrets floating around Magenta than meets the eye, even from within the royal family.

C. Drying’s CONTINGENT UPON MAGENTA is a quirky space opera where women rule and men know their place, but dissension knows no sex. Get ready for an alien world that makes Earth look fairly tame and mundane, yet still manages to have some interesting parallels. Can Cpt. Jones complete her mission? Does she want to? What will happen if the rebellion takes over?

Definitely quirky, pretty chaotic and sometimes hard to follow, C. Drying has created a colorful world that seems to be in even more trouble than ours. With characters who were a little flat and not always easy to like, I did find that, looking beyond that and imagining this world was reasonably entertaining.

I would say if you are looking for a different take on aliens, space operas and don’t need over-the-top heroic action, definitely take a look at CONTINGENT UPON MAGENTA.

I received this copy from C. Drying in exchange for my honest review.