End of All Things by Ethan Howard (Opportvnvs Adest, #4) 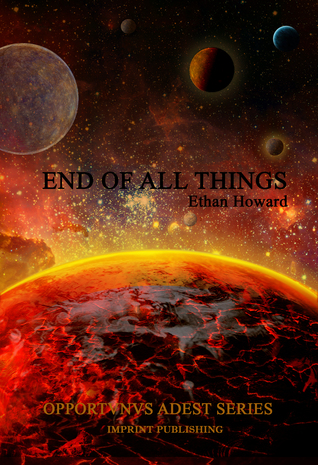 End Of All Things
by Ethan Howard

Humanity is in its final days. Rex Talion stands triumphant as the invasion of Earth has begun. The Degans and their allies roam the world destroying everything in their wake. Yar is no more. The Synod sits in the Beyond indecisive while the rest of the Collective follows suit. The way is clear and seemingly nothing can stop Talion and the Degans. The Discarded One has taken notice and the all-consuming evil being moves across the cosmos towards the planet he vowed to destroy centuries ago. If Earth falls, the universe will follow. Evil and darkness will reign supreme. Regina Tate has watched her world literally crumble around her. Regina’s son and best friend were murdered by her brother, Rex Talion. Quentin, the man she loves, and the one being capable of halting the horrors befalling the planet, has gone into a self-imposed exile on the moon in an attempt to atone for his past crimes. Earth is alone because each planet in the Collective fears for its own survival and will offer no assistance to the war-torn planet. The outlook for Earth is overwhelmingly bleak. Except…… There are a few special individuals who decide to rise to the challenge and oppose the forces of evil. The war to end all wars has begun. The battle for Earth and all of existence is at stake. This is the story 4.6 billion years in the making. More secrets are revealed. Lives are lost and worlds are destroyed. The universe will never be the same again… if it survives.

End of All Things by Ethan Howard (Opportvnvs Adest, #4)

This is it, humanity is about to go the way of the dinosaur and the end will not be pretty. It will be a nightmare of epic proportions as good and evil converge on the final battlefield. Will it be in time to save humanity as we know it? Was it even supposed to be?

As aliens band together on the side of good or evil, Earth is being decimated by the killing machines, the Degans under the command of Talion, a monster who should be dead. Is this the Armageddon spiritual leaders have warned of? Is it to come at the hand of aliens, not a god willing to forsake the world he once created?

Is it possible that our minds could not comprehend the vastness of space, and the fact that somewhere, out there are beings far superior to us? Did the unexplainable become the basis for an all-powerful being and creator? If not, then where is this being when his children are dying?

Even the aliens who tell of creation can only describe a mysterious pair of blue hands that reached through the blackness, created the world and disappeared. And yet, they would share their truths of the extinction of beings and creatures on Earth and what happened to them. As the chosen few listen, a new tale of the creation theory comes to light, and the parallels to our version are uncanny, yet fathomable. Where did the universe begin? Where will it end? Has Talion, the greatest of evils finally succeeded in his quest? Only a few know the truth and only one can bring him down, but then what? Will space become an empty parking lot, void of any life or is there one last chance for a do over if there is trust and faith.

Ethan Howard’s THE END OF ALL THINGS will leave its readers breathless, have them comparing what they have been taught or believe and what the aliens talk of. Has the apocalypse come in a form we could never expect? Will these events herald in a new universe, a fresh start or are they the death knell of a world too self-absorbed in itself to entertain that sharpest pencil in the universe’s box is not the third planet from our sun?

Rest up for this addition to the series, be prepared for the shock and awe of its revelations and mourn the deaths, the tragedies and the limits we have always placed on ourselves…and wonder if this truly is the end or just the beginning?

Fabulous, reading outstanding storytelling and quite simply an amazing series from Ethan Howard. If he isn’t on your authors “to read” list, he should be. But don’t wait too long, because you never know how long you have…

I received this copy from Ethan Howard. No strings attached.