Birthrights by J.Kyle McNeal (Revisions to the Truth#1) 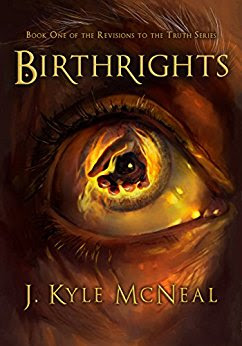 To escape the burden of his family’s past, Whym accepts an apprenticeship with a master his parents fear and revile. He soon finds himself entangled in a web of treachery and on a perilous journey to locate a creature of myth and magic–a journey that will transform Whym and shape the future of the realm.
Meanwhile, Quint, the son of a powerful religious leader, abandons his faith to join the fight against a corrupt council. As the adviser to a remote tribe, he must find in himself the wisdom and fortitude to save the people from the invading army–and their own leaders.
Civil war looms, defeated foes plot revenge, and an ancient deity schemes to destroy them all. While navigating the shifting sands of truth, the two young men must distill what they believe, and decide on whose side they will stand in the coming conflict.

Birthrights by J.Kyle McNeal (Revisions to the Truth#1)

Two young men, one burdened with the stain of his family’s past, the other the son of a powerful religious leader must accept and grow into the roles life has given them. Will Wym, the descendant of a disgraced leader be the one to lead the people into their future? Can Quint become the advisor to the dragon people, of whom he knows little? Both young men will be called on to go above and beyond what any could expect from them and they must divine the truth from the lies that are freely tossed all around them. When the dust has settled, where will they stand?
Prepare to fall into another world, place and time where magic and myths from the past will become more than just stories and unlikely heroes must decide where they stand and how far they will go on the stage of life, death and civil war.

BIRTHRIGHTS by J. Kyle McNeal is an epic fantasy lover’s dream! Completely removing us from our world we are transported to a place and time where the citizens fear both the power of their leaders and the unknown beyond their front steps. Feel the grit of the streets, the chilling darkness in the hearts and minds of people in power and follow the tales of two young men destined to become a part of history. Watch as each learns lessons of life from treachery to trust and envision each scene as if you are there, sword in hand as faith is tested and truth is a commodity often obscured by the smoke of thinly veiled lies.

Colorful scenes, unique characters and an intriguing plot make for a firm foundation for a series that is worlds away.

I received this copy from Elevate Publishing in exchange for my honest review.