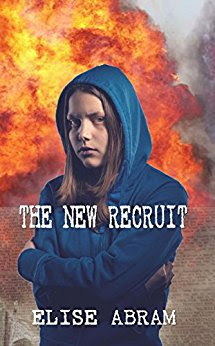 The New Recruit
by Elise Abram

When sixteen-year-old Judith meets Cain, she has no idea what she’s getting herself into. Cain is the most beautiful human being Judith has ever seen, but he hides a dangerous secret. When Jo-Jo, Cain’s surrogate father, offers her a job, she accepts, unaware she’s been recruited as a pawn in Jo-Jo’s ecoterrorist plot.

THE NEW RECRUIT is a timely story, exploring how, without love and support from those around them, our disenfranchised youth can be so easily misguided.

Her world has been turned inside out one more time. Sixteen, motherless and living with a father who loved her, but didn’t “understand” her, her needs her wants and her hormonal changes. Judith missed her mother, felt distanced from her father who struggled with his own life and now was the new kid at school in a new city. Judith was the perfect mark, the perfect patsy and was ripe to fall head over heels for the charismatic Cain. Judith was perfect to be THE NEW RECRUITfor an eco-terrorist plot spearheaded by the mysterious Jo-Jo and his son Cain. Cain offered Judith the love and attention she craved. He offered her a feeling of belonging, and he used her tumultuous emotions as blinders to hide the truth of his attentions.

Elise Abram’s THE NEW RECRUIT is the tale of how a lonely young girl falls into a vile plot she refuses to see for what it is, all because she is “in love.” What she is craving is the attention and security lacking in her broken home. She just needed a place to belong, and now she has it, or does she? Judith is NOT the perfect heroine, sometimes she isn’t even likable all of the time. Often she seems more gullible than needy and most definitely she has far too much alone time while her father struggles to overcome his own grief.

The message of this tale is raw and real, as one teen is left to her own devices to make decisions she may learn to regret for the rest of her life, all because she was so willing to “drink the Koolaid,”all for the attention she so dearly craves.

A good read, sometimes just a little flat, but certainly timely in a world where more and more children are left unguided in life.

I received this review copy from Elise Abram in exchange for my honest and voluntary review.