Rescued by the Captain by Laura A. Barnes 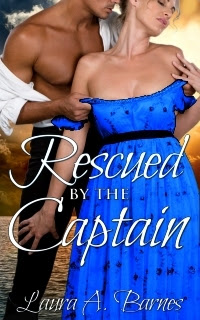 Rescued By the Captain
by Laura A. Barnes

Abandoned at sea.
When Ivy Mallory awakens; she finds herself on the ship of the man who rejected her love years earlier. While he was away working for the Crown, she embraced the London Seasons trying to forget him. Caught in the middle of a treason plot; she must help save her brother. To do so she needs to put her trust in the one man who can protect her. But can she protect her heart from loving him again?

Found at sea.
Captain Marcus Thornhill never imagined he would find a lady floating unconscious in a lifeboat out in the middle of the open sea. But it wasn’t any lady, it was Ivy. Seven years earlier he rejected her love for a life at sea. As he rescues her he gets involved in a treason plot that will bring the war to their beloved shores of England. As he unravels the plot he is unable to deny his desire for her. Is he too late in saving her and the love he has for her?

Rescued by the Captain by Laura A. Barnes

A swashbuckling sea captain, a lady from his past, unconscious and adrift in a lifeboat, and treason against the crown, Captain Marcus Thornhill’s life was about to become part of a deadly game where both his heart and his life could be forfeit.

Marcus left the woman he loved behind after breaking her heart and now she is back, half-alive and on a mission to help her brother, an agent for the queen caught when an undercover mission goes wrong. Ivy is determined to find her brother and save him, unaware of who he is and she needs Marcus’ help. Neither has ever forgotten the other and this is Marcus’ chance to let Ivy know how he has always felt, but his best friend is missing and he may be the only person who knows where is can be found, if he is still alive. Ivy is so tempting, can he resist the innocent charms of this fiery and headstrong woman? She is not the young girl he once knew, and he knows he cannot walk away again, especially if he tastes the pleasures of her charms.

RESCUED BY THE CAPTAIN by Laura A. Barnes brings steam and passion to the high seas, as well as intrigue and the constant need for Marcus to attempt to keep Ivy safe, from others, as well as herself. Even as their passions flare, they seem to lack the ability to actually communicate their feelings for each other. A quick read, filled with constant sexual tension and a seemingly impossible quest, but I just never connected with all of the characters and found their verbal interaction to become a bit tedious, but one must remember, this is historical fiction and plain, open talk was certainly not the norm!

I received this copy from Laura A. Barnes in exchange for my honest and voluntary review.

Email ThisBlogThis!Share to TwitterShare to FacebookShare to Pinterest
Labels: Laura A. Barnes