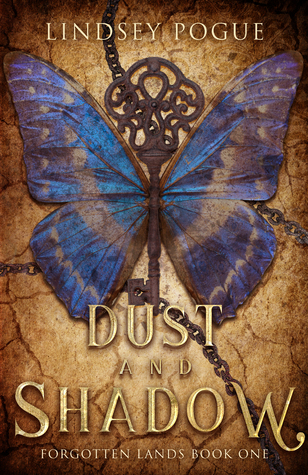 Dust and Shadow
by Lindsey Pogue

Eleven years ago, my mother was murdered, and still, her killer lives in plain sight.

In Sagebrush Canyon, thirst rules, ignorance is power, and nothing is as it seems. It’s been two centuries since the boom of the Industrial Revolution sent the Victorian world into a devastating climatic shift. Now, chivalry is dead and the frills and frivolities of the romantic era are no more than a fading memory.

Jo has kept to the safety of her family’s farm, desperate to forget the horrific day that took her mother and left Jo battered and broken. But the marshal of Sagebrush is everywhere--he controls everything--and for years Jo has had to stomach the false pleasantries and knowing glint in the eyes of the man who killed her mother.

When Jo discovers how deep the marshal’s seedy dealings run she decides that fear will no longer keep her silent. But just when Jo plans to expose him for what he really is, the marshal plays a card of his own—his notoriously scandalous son, Clayton. As Jo and Clayton are thrust together, lines become blurred, truths are revealed, and Jo must decide what she is willing to sacrifice in exchange for retribution.

Dust and Shadow is a post-apocalyptic love story and Victorian adventure set in a devastated and forgotten world of the American wild west.

The Forgotten Lands is an alternative history series, exploring the aftermath of the Industrial Revolution that changed nineteenth-century life and created a world fraught with floods, droughts, sandstorms and toxic fog. The Forgotten Lands will traverse deserts, roam plains, cross oceans, and take you on a journey underground to discover life after the Shift.

In a world reminiscent of the old Wild, Wild West, the small and isolated town of Sagebrush Canyon struggles to survive amidst water and food rationing, a controlling marshal and the onslaught of killer sandstorms. It’s been two hundred years since Industry has created a deadly climate shift and the human world has gathered in isolated pockets and in some, like Sagebrush Canyon, the very essence of humanity is tested.

Jo has lived with the horrors of her mother’s murder for more than a decade, wearing the façade of pretense every time she looks into the eyes of the murderer, because he holds an iron grip on the very survival of her small town, but enough is enough and just as she conjures the nerve to call him out on his crime, the marshal makes a play of his own, one she never saw coming.

Clayton is the marshal’s wastrel son and now he and Jo will be forced into a union that will change the face of their town and the future of life after the shift as they become unlikely allies uncovering the sins of the past and the lies told for far too long. Vengeance comes at a price and Jo must decide if she is willing to pay what may be the ultimate sacrifice, or will she see that justice has its own way of being served?

Are Jo and Clayton actually two sides of the same coin? Do they have more in common than she could have imagined? Sometimes the strength you need comes from the least expected places and the truth can set an entire free, but then what?

Lindsey Pogue’s DUST AND SHADOW has the grit of a desperate battle between good and evil, as a small town girl takes on the well-oiled political machine that rides roughshod over her world. Feel the scrape of the sand, the raw power of the deadly winds and the strength of determination awakening from the misery of cowering in fear! Ms. Pogue has blended the feel of the old West, the devastation of a post-apocalyptic world and given it hope with an unlikely romance that evolves in the bleakest of times! Wonderful characters, brilliant dialogue and razor-taut tension in a read that can leave you white-knuckling through its pages! Can't wait for more!

I received this copy from Lindsey Pogue!