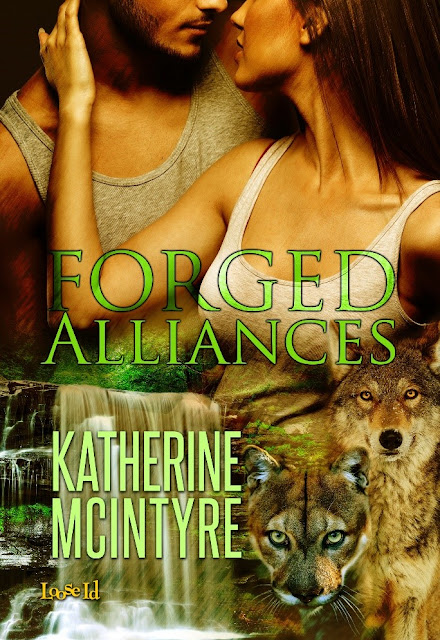 Sierra Kanoska fought hard for her position as wolf alpha of the Red Rock pack, and intruders in her territory receive the full brunt of what her claws, fangs, and smarts can accomplish. So when Dax Williams, de facto alpha of the Silver Springs pack, pays an unwelcome visit, Sierra’s ready to toss him out. However, the man's in a tough spot. The pack elders sabotaged his fight for alpha against his brother, driving him from his lands. Sierra hates underhanded moves like that, so she agrees on an alliance.

As they work together, she witnesses an alpha who wants to do right by his pack, not just the cocky wiseass she first met. Their growing attraction blazes hot, but the moment she and Dax lock lips, a mating bond emerges. Sierra sure as hell isn’t ready to share that intimate connection with a stranger, and the thought of forever sends Dax running.

Before they can talk, the Tribe commanding the East Coast shifters arrives to settle the dispute. Dax and his brother's punishment for their pack's civil war is a free-for-all on their lands. Not only does he have to defeat his brother, but any challenger in the region. Despite Dax and Sierra’s initial resistance, his wily charm relaxes her control-freak tendencies while her steadfast support bolsters his strength. Yet every new opponent places their newfound relationship under siege—one misstep, one wrong blow in the ring, and Dax could leave in a bodybag.

Sierra Kanoska earned her place as alpha of the Red Rock pack. She is tough, doesn’t back down and will stop at nothing to protect her territory and her pack. She had no idea the night Dax Williams, sauntered into her bar that the world she has ruled with an iron fist was about turn into a world of danger and challenge, for both her shifters and her heart.

Dax needs help and asking for it from anyone isn’t an easy thing for an alpha mountain lion to do. Since the death of his father, the Silver Springs pack has been divided between following his brother or following him as their alpha. What Dax needs from Sierra is the strength of another alpha and her pack to right the injustice that has been done and reunite his own fractured pack. Of course, his cocky attitude and those alpha pheromones aren’t helping him make his case, but the truth in his words lights a fire in Sierra, a fire that runs straight to her wolf and her heart.

Flat out, Sierra is a control freak and this cat with his feline attitude raises her hackles almost as much as the terrifying fact that they may be more than temporary allies in a deadly feud that must play out. Is sierra just what Dax needs to push him just enough to regain his pack and his own sense of self-worth?

FORGED ALLIANCES by Katherine McIntyre is a steamy, yet action-packed start to a new series that promises to introduce us to new shifters, new problems in the shifter world and tons of attitude and, of course, sizzling animal attraction! For me, Sierra stole the show with her hard as nails attitude that hid her vulnerability. This shifter has guts to spare and a temper that runs hot! The tension runs high throughout this tale, as the action bounces from scene to scene, never relying on only one aspect to carry this tale along!

I received an ARC edition from Katherine McIntyre!