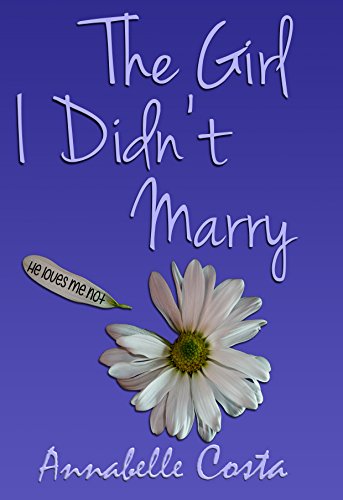 The Girl I Didn't Marry
by Annabelle Costa

I’ve wanted to marry Jessie Schultz since we were fourteen years old.

It doesn’t matter that I’m just a dumb schmuck from Bensonhurst, Brooklyn, and Jessie’s the most beautiful girl I ever met. It doesn’t matter that her father would rather rearrange my face than let his only daughter end up with the son of a local mobster. But it does matter when he starts threatening Jessie about what he’ll do if he sees us together again. So I gotta wait.

Then I get hurt.

I can’t let her see me after. Not like this. Not when I can’t even stand up to look her in the eyes.

So I wait again. Hoping I get better, knowing if I don’t, it could be the end for us before we even get started.

Is it possible to find the love of your life at fourteen? Clearly for Jessie and Nick the answer is yes and their youthful chemistry proved it beyond a doubt as they each tell their side of their ill-fated love story.

THE GIRL I DIDN’T MARRY by Annabelle Costa is one of “those” reads that cannot be forgotten, because it scrapes across not only one’s nerves but one’s very soul. Sometimes love can’t conquer all and it hurts and it scars, but for these two the scars will remain festering sores for years to come.

She was the new girl, he was the kid with the dubious family “business.” Her world wasn’t one of unicorns and rainbows, but Nick gave her exactly what she needed, his support, patience and unconditional love. Too bad life got in the way. Too bad Nick faced an unspeakable tragedy and didn’t have Jessie by his side, even when she tried to see him, even when she needed him most.
Life goes on and the years go by, and still their love survives, even as they live their separate lives until one more tragedy brings them face to face once again…

Raw, emotional, sweet and heart-wrenching best describes Annabelle Costa’s tale of a love that never had the chance to grow and nurture two souls who were meant to be together. This is a tale whose characters all share a huge part in its telling. Jesse is like a wounded bird and Nick is her protector. He is that boy you could take home to meet the family, except for that one small matter of his family and the fear that the apple doesn’t fall far from the tree. I loved every page, and I hated every page. What an emotional roller coaster this well-written tale took me on! There is no way this story could be given justice in just one book! I'm hanging on by a thread here, waiting for book two!

I received this copy from Annabelle Costa!