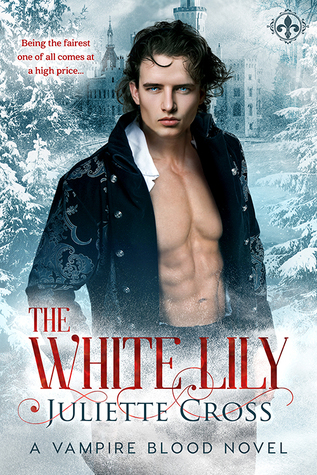 The White Lily
by Juliette Cross
My rating:

To the north of the Varis empire, a mysterious faction spreads propaganda against the vampire monarchy. Friedrich Volya, the Duke of Winter Hill, seeks to discover who they are before his uncle finds them first. King Dominik will punish the traitors with brutal force.

Local schoolteacher, the raven-haired Brennalyn, is on her own mission—to spy on the duke and discover what she can for the Black Lily. She longs to help the commonwealth and bring justice to the many orphans left behind from the ravages of the blood madness, like the children she lovingly keeps in her care. What she doesn’t plan for is the heart-pounding attraction she feels for the duke, enemy to the Black Lily.

But when Brennalyn’s secret puts her life and the life of her children in danger, Friedrich steps in as her protector, she finds out there’s more to the duke than she thought.

He was a royal vampire, powerful, charming and deadly if threatened. Friedrich also has a secret agenda to save humanity from the brutal vampire king, his uncle.
Fiercely independent and driven to protect her young charges, school teacher, Brennalyn will do anything to give a better life to the street orphans she shelters, including acting as a spy for the Black Lily. What Brennalyn hadn’t allowed for was the sensual power and magnetic attraction of the Duke of Winterhill. How can she possibly fulfill her duties to the Black Lily if this vampire has her weak in the knees like a young schoolgirl? How far must she go to convince Friedrich to give up secrets she can send to the rebels? What if he is nothing like she thought he would be? What if he had his own agenda she never could have expected?

Juliette Cross hits another home run with THE WHITE LILY! Filled with characters that run the gamut from clever to adorable, beautiful to devastatingly handsome, their physical descriptions are only part of what makes this tale come to life! Each scene is like stepping into this tale, each character is dynamic in their own right, with a feisty and big-hearted heroine just a little out of her league as a spy and a dashing vampire with a heart and the daring to do “the right thing” for humans as well as vampires. Together, Friedrich and Brennalyn are the fabric that creates a beautiful tapestry of intrigue, romance and even light-hearted moments!

I received an ARC edition from Juliette Cross!
Posted by Dii at 9:21 PM