Wolves and Roses by Christina Bauer (Fairy Tales of the Magicorum, #1) 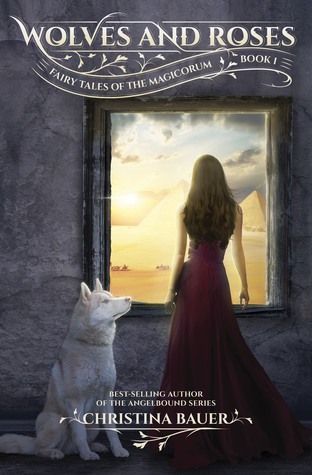 Wolves and Roses
by Christina Bauer

Seventeen-year-old Bryar Rose has a problem. She’s descended from one of the three magical races—shifters, fairies, or witches. That makes her one of the Magicorum, and Magicorum always follow a fairy tale life template. In Bryar’s case, that template should be Sleeping Beauty.

“Should” being the key word.

Trouble is, Bryar is nowhere near the sleeping beauty life template. Not even close. She doesn’t like birds or woodland creatures. She can’t sing. And she certainly can’t stand Prince Philpot, the so-called “His Highness of Hedge Funds” that her aunties want her to marry. Even worse, Bryar’s having recurring dreams of a bad boy hottie and is obsessed with finding papyri from ancient Egypt. What’s up with that?

All Bryar wants is to attend a regular high school with normal humans and forget all about shifters, fairies, witches, and the curse that Colonel Mallory the Magnificent placed on her. And she might be able to do just that--if only she can just keep her head down until her eighteenth birthday when the spell that’s ruined her life goes buh-bye.

But that plan gets turned upside down when Bryar Rose meets Knox, the bad boy who’s literally from her dreams. Knox is a powerful werewolf, and his presence in her life changes everything, and not just because he makes her knees turn into Jell-O. If Bryar can’t figure out who—or what—she really is, it might cost both her and Knox their lives… as well as jeopardize the very nature of magic itself.

Wolves and Roses by Christina Bauer
(Fairy Tales of the Magicorum, #1)

Seems like Bryar Rose should have been living a fairy tale life, but the “template” for her life was nothing like what she wants for herself. Face it, Bryar Rose was NOT princess material, she has no interest in the “prince” her three aunts had chosen for her to marry. What she wants is to live like the normal humans, go to a normal high school and leave all this magical stuff behind. Her true passion lay in studying the mysteries of certain ancient papyrus papers, and it was taking that interest just one step too far that would mark a change in Bryar’s life forever as she uncovered more than just ancient writings and met the boy of her dreams standing in a shadow…now, if she could just lose the “Sleeping Beauty” template she has been living, stay awake long enough to reach her eighteenth birthday and avoid being kissed by Prince Philpot, maybe she could live a real girl’s life, her way. Of course, there is a matter of a mystery that must be revealed, deceits that must be uncovered and the fate of the magical world to take care of, too.

Magical beings living side by side with humans, dark secrets, and a coming of age story, all this plus a fabulous sense of plot flow, brilliant dialogue, characters that each have their own sense of charm and I was hooked! Bryar steals the show with her wit, penchant for trouble and her inner free spirit that is just dying to be set free!

WOLVES AND ROSES by Christina Bauer is fast, fun and magical reading! Settle in for a few chuckles, some adventure and pure entertainment as Ms. Bauer takes us into the world of the Magicorum and a whole different version of what happily ever after can be!

I received an ARC edition from Monster House Books, LLC. This is my honest review.