Curse of the Coloring Book: A Novel Inspired by a True Story by Howard L. Hibbard 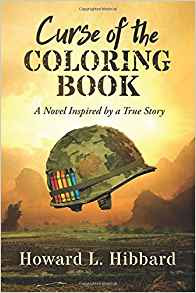 Curse of the Coloring Book
A Novel Inspired by a True Story
by Howard L. Hibbard

When Herald Lloyd, an attorney and family man, learns he’s been cursed with a catastrophic legal-malpractice lawsuit, his recurring Vietnam War flashbacks flood his consciousness, and he medicates his post-traumatic stress with alcohol.

He was reckless to quit college to join the Army. Mocking the war, he bought a GI Joe Coloring Book and half-gallon of whiskey, for a drunken send-off with his fraternity brothers. Vietnam hurls Herald into becoming a decorated combat platoon leader, commanding stressed oddballs and misfits like Dogman, who walks point and only barks to communicate. Now he must fight again, this time to save his client, law practice, and family.

Was the coloring book cursed?

Curse of the Coloring Book: A Novel Inspired by a True Story
by Howard L. Hibbard 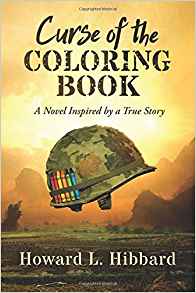 He made a mistake and it may cost him everything his law practice, his reputation, his home and possibly his family. One omission on an otherwise brilliant document for a case he had won for his client and now his world is almost as chaotic emotionally as it was all those years ago in the rice paddies and steam of Vietnam. Herald Lloyd is in trouble, his PTSD, his alcoholism and his life are spinning out of control and he is caught in the vortex of the maelstrom as the horrors and flashbacks of the past collide with the present situation he has created himself, quite accidentally.

Follow the harrowing and heartbreaking story of one man’s journey to Hell and discover how he never really came back, no matter how many years and miles separate him from the death and the terror of being a soldier in Vietnam. We are taken to those battlefields, told of the blood, the sweat and the heart-wrenching losses followed by the guilt of feeling responsible for some of those darkest moments when a “brother” is lost. We will feel the self-imposed guilt of being a survivor, the fall into the mind numbing bliss of alcohol and the loss of the innocence Herald can never get back.

Share the gallows humor of men whose lives could be gone in an instant, watch as their inner selves implode, leaving only the soldier who would die for those around them one minute and quake in fear the next. What makes a man a hero? After reading CURSE OF THE COLORING BOOK by Howard L. Hibard clearly a man is a hero if through all of the horrors he must witness and even inflict, he can still find just a little more to give for those around him.

This fictionalized true story is gut-wrenching and NO ONE who has not lived it can truly understand what this author is talking about. Those of us who know or love someone who came home from Vietnam or any war have stood by helplessly as we have watched the aftermath. No matter your personal beliefs, read this, meet these soldiers, mere boys who are sent to do what the politicians won’t. Anyone can declare war, or as in the case of Vietnam, “not war” but only a real hero can crawl through the death and hope to survive and no hero should have to deal with the emotional aftermath. And PTSD is real.

If you read anything out of your comfort zone this year, I highly recommend CURSE OF THE COLORING BOOK as well as E. Michael Helms’ THE PRIVATE WAR OF CORPORAL HENSON
I am voluntarily reviewing this copy sent from Howard L. Hibbard.