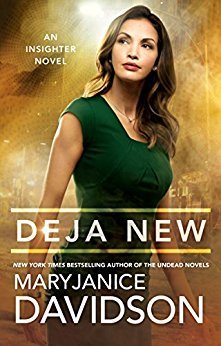 Leah Nazir lives in a world where the past can and will come back to bite you in the ass. No, not teething ghosts—reincarnation! As an Insighter, it’s Leah’s job to delve into the murky and (often) deadly former lives of her patients. And she knows a thing or two about danger after killing her mother’s murderer with the help of new beau, Archer Drake.

Isn’t he the best?

Now, it’s time to take their relationship to the next level, but not in any way Leah could have predicted. She and Archer head to Chicago to meet his parents—and try to figure out why Archer’s dad killed his brother decades ago. When someone tries to sabotage their investigation, Leah must decide if the Drake family past is a deal breaker…

Strap yourself in for a whirlwind of chaos, past and present as the Insighters plunge themselves into the often murky past lives of those around them. Hey, it’s a job, someone has to do it! Dark humor, dark secrets and an overwhelming sense of being caught in a kaleidoscope on a merry-go-round pretty much describes the constant motion this tale is in.

Can you imagine being able to see the past lives of others, as well as your own? Not sure who would need therapy more, those being “treated’ or those doing the “treating.” Murder, mayhem and confessions abound, but Leah must find the truth, somewhere in time.

DEJA NEW by MaryJanice Davidson is like a dark comedy run amok. Sit back, relax, take a Dramamine if necessary, this is going to be one heck of a ride! You'll love it or you will walk away shaking your head, either way you will remember this one. I kind of did both.

I am voluntarily reviewing this ARC edition offered by Berkley.