Grigori by Lauren Smith (Brothers of Ash and Fire #1) 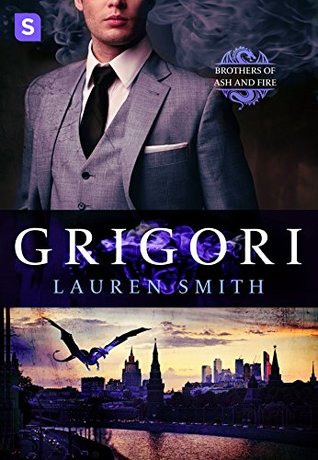 He’s one of the last of a powerful but vanishing bloodline … Grigori Barinov is the eldest in an ancient line of dragon shifters and the guardian of his family’s lands and fortune. Sworn to protect their history and magic, he won’t rest until he neutralizes any threat to their existence. When he discovers an ancient manuscript that exposes his family and their dragon lineage has fallen into a mortal woman’s hands, he knows he must get the book back by any means necessary. If that means seducing a nosy American woman with an intoxicating scent, he is more than willing to carry her off to his palatial home deep in the heart of Russia.

She’s the one woman who could expose him to the world… Madelyn Haynes has never fit in. As an adopted child she grew up in a loving home but never felt as though she belonged. Plagued by mysterious dreams she’s had of a silver scaled beast ever since she was a little girl, she is convinced dragons are real. While in Russia working on her PhD in mythology in order to escape the ridicule from fellow professors, she unexpectedly crosses paths with the sexy and dominating Grigori, and after just one night with the man whose eyes seem to burn, she starts to change inside. Isolated in the Russian wilderness Grigori calls home, Madelyn can’t help but fall under his sensual spell, yet something deep inside her calls out that she can’t trust him. She has to show the world dragons are real to salvage academic reputation, even if it means costing her the heart of the dragon she’s falling in love with.

You had me at dragon shifters!

Madelyn Haynes has been haunted by dreams of a silver dragon. Of course, she would be drawn to the topic if you’ve had visions of them ever since you were a child. Now working on her Ph.D. in mythology, Madelyn goes to a Russian library that supposedly holds a diary of a man who met dragons. When she requests access to the book all kinds of protocols are set in motion putting her on Grigori’s radar.

Grigori is an ancient in a line of dragon shifters. He swoops in thinking to eliminate a threat to their secret only to find a fiery maiden who will do anything to prove her visions are real…but at what cost?

Heated from their first encounter, Grigori is slow building but then the fiercest passions burn long and hard. A great start to a new series, Grigori was a great start to what I’m sure will be a strong series from Smith.

I received this ARC copy of Grigori from St. Martin's Press. This is my honest and voluntary review. Grigori is set for publication October 3, 2017.