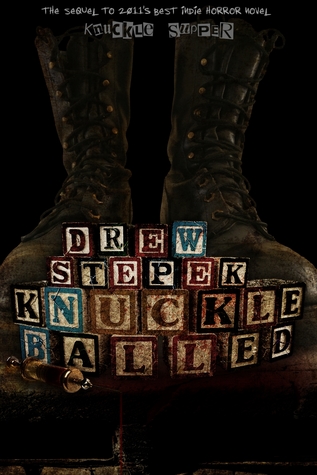 Following the Vampire holocaust in LA, RJ and Eldritch find themselves in Austin with Bait’s younger sister, Pinball, searching for the great L. Byron Nghtyshade--the only one Eldritch believes can help them. But Austin is weirder than the duo could have imagined. Not only are there more vamp gangs hindering RJ’s mission, they’re more insane than their LA counterparts and addicted to harder drugs than heroin.

The obstacles push RJ into a pit of self-loathing and doubt of saving Pinball from her sister’s fate. As the chances of survival dim, and RJ is given one final chance at redemption, he must confront the one true evil… himself.

With more scum, more blood, and more drug-induced mayhem than the first book, Stepek gives the genre another twist in his unique take on the undead and their ongoing drug wars.

After all hell broke loose in L.A., RJ, Eldritch and their newly rescued charge, nine-year-old Pinball head to Austin and hopefully a safe haven for the young and abused, cancer patient. All they need to do is find and gain audience with the vamp with the power, a famous star who is harder to gain an audience with than the Pope.

What they find is danger at every turn, crazed gangs with the group mentality of an amoeba and drugs that make heroin look like peppermint candies. Face it, just landing in another Vampire’s territory is deadly and RJ has a special knack for pissing off the local gangs when all he wants is to ditch the girl and go on his way. Something happens to RJ that even he is hard-pressed to believe, he is growing a heart, and even doing nice things for the little girl who is the last member alive in her family, maybe because it was all his fault? Maybe because all Pinball knew was the abuse her parents dished out, and she equated that with love? Probably he shouldn’t have ended their pathetic existence the way he did, nope, he wasn’t wrong, but…

From crazed vamps on rollerblades to the preppy vamps who also ran from L.A., to the religious fanatics that were responsible for his very existence, RJ’s life has never been so chaotic and never has he had to dig so deep to survive and do the right thing.

Drew Stepek’s KNUCKLE BALLED is more than just another gory, over-the-top vampire tale that exceeds the norm for foul-mouthed quips, gore and over-the-top twisted moments. It becomes the redemption of one Vampire’s soul in a wildly chaotic fashion! Once again, prepare to be shocked, amused and amazed at the creative talents of Dew Stepek as he tackles the un-life of the undead on the seedy side of the streets and encourages his readers to see anti-heroes and the ravages of drug wars in a different light.

Go ahead, take a walk on the wild side and throw caution to the wind, but beware, Drew Stepek’s writing may become addicting.

I am voluntarily reviewing this copy.