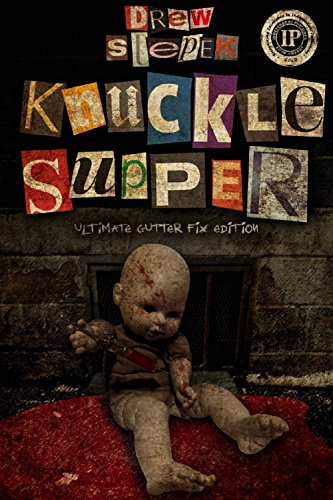 Leave your timidity at the door, and maybe your shock, your sense of appropriateness, but be sure to bring your sense of humor because Drew Stepek is about to upend everything you ever thought you knew about vampires, or sort of vampires. While he’s at it, he is going to school readers in the evils of drug dependency, child abuse, prostitution and gang-related turf wars. When he’s finished, you will find yourself caring about the villains, no matter how twisted they may seem.

Meet R.J. Reynolds, vampire, heroin addict and gang leader, whose cold, dead heart is probably bigger than his cold, dead, drug-fried brain as he steals drugs from a rival gang, and takes in a pre-teen prostitute who would give anything to become a vampire.

Oh, make no mistake, R.J. is no saint, and not just a misunderstood vampire looking for redemption. He is one of many brutal and disgusting creatures who live for that next fix, laced with human blood, fresh, of course, like maybe form the stump of an arm or any other appendage.

One thing we will learn, thanks to R.J. is how these vampires truly came to be and trust me, it is a stomach turner and quite clear that he and those like him are the victims of human depravity. Bait, the twelve-year-old prostitute has an equally horrendous story to tell and bless her, she spares nothing in the details.

KNUCKLE SUPPER is one of those reads that you will love or hate, and probably will never make the Great Classics list next to Huckleberry Finn, but it is daring and it does present a pretty raw picture of life on the very dark side of the street. If you have no issues with over-the-top gore, twisted, off-color humor and language that could make a truck driver blush, you will most definitely be entertained from start to finish and you will probably take away a whole new appreciation for how much it sucks to be a misunderstood vampire in a world where no one can be trusted and your lot in life seems to be floating around in a toilet bowl.

If you want some eye-opening reading, don’t mind some major discomfort and aren’t afraid to admit that there were times your stomach felt like rebelling, I say, give it a try!